Hyundai Nexo Will Deliver 370 Miles on Tank of Hydrogen 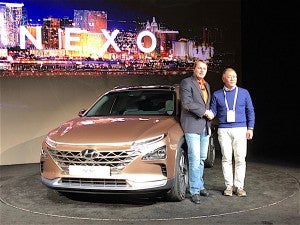 The Nexo is the latest in the wave of “eco” vehicles from the South Korean carmaker, a list that will include a mix of 18 hybrids, plug-ins, pure battery-electric vehicles and hydrogen cars by 2025. Sibling brand Kia will share the underlying fuel-cell system for a new model of its own before the end of the decade.

Following up on the 2013 debut of the original Hyundai Tucson FCV, “we’re ready to showcase how far our fuel-cell technology has come,” said Hyundai Senior Vice President Ki Sang-Lee said during a roll-out of the Nexo at CES.

Like the original Tucson model, the Nexo takes the shape of an SUV, but it rides on its own unique platform specifically developed to take advantage of its fuel-cell driveline. In this case, three separate tanks are mounted under the cargo load flood, providing enough compressed hydrogen gas to power the Hyundai Nexo for a “world-beating” 370 miles. 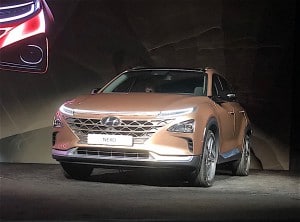 The new Nexo gets 370 miles on a charge and can be refilled in about five minutes.

That’s as much as 50 miles more per tank-up than the other two hydrogen cars currently on the U.S. market, the Toyota Mirai and the Honda Clarity. Like those FCVs, the Hyundai Nexo needs to access special pumps, but once hooked up it can fill up its three tanks in about five minutes, comparable to what it takes to fill up a gasoline-powered vehicle.

Hyundai officials were cautious about revealing specific details of the Nexo powertrain, though they did note it produces about 120 kilowatts of power, the equivalent of 161 horsepower. Fuel-cell stacks are sometimes referred to as “refillable batteries,” because they produce current that is used to run the same sort of electric motors as a battery-car.

That current also can be used to power the energy-hungry sensors and computer processors needed to operate a vehicle autonomously. The pre-production concept version of the Nexo is equipped with the latest advanced driver assistance systems, or ADAS, like Blind-spot View and Lane Following Assist, the latter technology helping to keep the FCV centered in its lane at speeds up to 93 mph on both the highway and city streets. 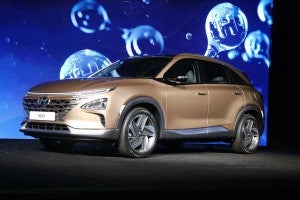 The new Nexo features a slew of Level 2 autonomous features, but is expected to be Level 4 capable.

(Click Here for more about the 2019 Hyundai Veloster heating up the hot hatch market.)

The new crossover-utility vehicle also boasts Remote Smart Parking Assist that lets Nexo autonomously park or retrieve itself from a garage or parking space with or without a driver in the car. RSPA can even back a Nexo into a perpendicular parking spot while the driver stands on the curb and pushes a button on the key fob. Hyundai did not confirm whether that technology will be offered on the U.S. version of Nexo when it debuts later this year or will follow at some future date.

At the CES debut of Nexo, Hyundai officials also outlined their plans to take their vehicles up to Level 4 autonomy, which would effectively allow driverless operation, albeit only in some areas. That technology won’t debut, they cautioned, until around 2025, though a limited pilot program is scheduled to debut around 2021. 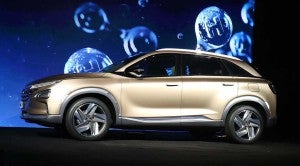 The Nexo will be available in a limited number of markets later this year.

Earlier this month, Hyundai announced a new alliance with Volkswagen and San Francisco-based start-up Aurora Innovation. It’s headed by former Google autonomous vehicle chief Chris Urmson. Hyundai officials said they expect the project to help them speed up their self-driving vehicle program. The technology that comes out of the new partnership will also be shared with Hyundai’s sibling Korean brand Kia.

As with the current Tucson FCV, the Hyundai Nexo will be offered only in a handful of limited markets, including the Orange County and San Francisco Bay areas in California, where public hydrogen fueling stations have been established. The Golden State is hoping to have as many as 100 stations open to the public by 2020, and distribution networks are starting to pop up in several other parts of the country.

(To see more about Hyundai partnering with Urmson, Click Here.)

Industry analysts say that will be critical to building acceptance for hydrogen fuel-cell technology. But the roll-out could be slow, Woong Chul-Yang, Hyundai’s Vice Chairman for R&D, cautioning that it could be 20 years “before there is a significant market” for hydrogen-powered vehicles.