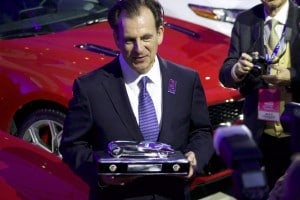 In what was seen as the most unpredictable set of choices in the 24 years of the NACTOY Awards, Honda Volvo and Lincoln pulled out wins on Monday morning, marking the start of the 2018 North American International Auto Show.

“We have an incredibly broad set of vehicles this year,” said Mark Phelan, president of the North American Car and Truck of the Year, adding, “I’ve never had less of a clue of who I think would win” before being handed the results of the secret ballot.

The totals were revealed after the awards and the totals revealed the sentiment about the small margins of victory. The Accord beat the Stinger by just 31 points while in the truck category, the winner, Lincoln Navigator, beat the third place finisher, Ford Expedition, by 20 points. 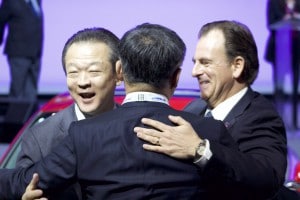 Honda executives celebrate the 2018 Accord capturing the car of the year honor. (Photo credit: Brendan Strong)

The awards are voted on by 60 journalists from the U.S. and Canada, representing a broad mix of broadcast, radio and print journalists. There are three categories for car, sport utility and truck. The nominees in the car category were the Kia Stinger, Toyota Camry and Honda Accord.

(Honda, Ford among finalists for NACTOY awards. Click Here for the story.)

In the sport-utility vehicle segment, the nominees were the XC60, Honda Odyssey and Alfa Romeo Stelvio. The Chevrolet Colorado ZR2, Ford Expedition and Lincoln Navigator were the truck nominees.

In what was the toughest segment according to jury members, Honda pulled off a win with the 2018 Accord.

“It’s an incredible honor,” said Henio Archangeli, the recently appointed head of the Honda division, said after he jumped on to the stage to accept the award. “This represents all of the hard work everyone has put into this vehicle.”

Honda has been a repeat winner throughout the decades, and it wasn’t the first time the Honda and Toyota have squared off for the honor. However, the big surprise was the Kia Stinger, considered by many the most significant vehicle the South Korean automaker has ever produced.

(Click Here for the story about this year’s Best Brand winners.)

On the sport utility side, the Volvo XC60 took the trophy. It’s a significant development for the Chinese-owned, Swedish-based automaker. It’s been nominated five times in the last three years, with this being its second win. It was honored previously for the bigger crossover the XC90.

“It’s a kind of a certification. We have something going on in the company,” said Anders Gustafsson, CEO of Volvo Cars North America.

But even in this category, there were plenty of questions about who would take the trophy, especially with Honda winning broad kudos for its Odyssey and Alfa Romeo earning praise for the Stelvio, its first-ever SUV.

In the body on frame vehicles of the truck segment, there were plenty of reasons to wonder who would come out on top. When the dust settled, the Navigator took the award. Kumar Galhotra, Lincoln President, told the audience, “All of us, who work in this industry, know that a vehicle like this can’t be created without a lot of help.”

Following the ceremony, he told TheDetroitBureau.com that winning the award was particularly significant, “it means recognition for the momentum we’ve built,” for a brand that has been struggling to regain its once lofty position in the luxury market under an assault of a wave of imports and poor product decisions. “But it’s just the next step in the process,” he added.