But tax credits may soon run out for some automakers, anyway. 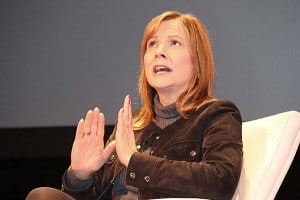 GM CEO Mary Barra has been pushing to keep the EV tax credit as lawmakers have been looking for ways to cut it.

While there remain plenty of questions about the impact of the new Congressional tax bill, it looks like electric vehicle buyers – and manufacturers – have reason to be pleased.

The joint bill agreed to by House and Senate Republicans scuttles a proposal that would have eliminated the tax credits of up to $7,500 available to buyers of qualified vehicles such as the Nissan Leaf , Tesla Model 3 and Chevrolet Bolt EV. Automakers and other proponents had feared that ending the credits might have short-circuited the EV market just as a flood of new offerings were set to charge into showrooms.

“Repealing that credit (would) have an impact because it changes the equation that determines whether people want an electric vehicle,” General Motors CEO Mary Barra said last week during a meeting with automotive journalists.

The Leaf, Model 3 and Bolt are the first in a wave of new, more affordable long-range vehicles, but even at prices under $30,000, analysts caution they would be difficult for potential buyers to justify on a cost-of-ownership bases. The equation becomes more attractive when factoring in the credits which run from a low of $2,500 for vehicles equipped with modest, 4 kilowatt-hour batteries, up to $7,500 for vehicles like those three new models, the second-generation Leaf carrying 40 kWh in lithium-ion cells and the Bolt and Model 3 packing in 60 kWh.

The Trump Administration as well as the current, GOP-controlled Congress, have shown far less interest in alternative propulsion than the Obama Administration. The White House is currently considering whether to roll back, or potentially even eliminate the 54.5 mpg Corporate Average Fuel Economy, or CAFE, standard set to phase in between now and 2025.

Buyers of the Model 3 should still be able to get their federal government tax credit.

Industry experts have anticipated that a large and growing share of vehicles will need to add hybrid, plug-in or pure battery-electric drivelines to meet the standard. But a study released in November by the Boston Consulting Group warned that it will likely not be before the middle of the coming decade that the cost of batteries drops enough that such driveline technologies would be price-competitive with conventional internal combustion power.

The study did note that lithium-ion cells have dropped from about an average of nearly $700 per kWh in 2010 to around $150. It forecasts that will continue to dip to $70 over the next five years. And next-generation “solid state” batteries could cut that by another 10% or more.

By that point, said BCG analyst Xavier Mosquet, “market forces, not regulations” or incentives will drive the adoption of electric vehicles. But in the meantime, cutting subsidies would be “a mistake (that would) have a significant impact,” he warned last month.

“Cost will be the big driver here,” echoed Josh Buettner-Garrett, CEO of Solid Power, a Colorado company that is one of many working on solid state batteries. With at least temporary government support, he added, “We have a real clear path and feel real good about the road map ahead of us.”

Proponents of electric propulsion say that incentives do more than just give buyers a reason to go electric. They point to U.S. Department of Labor statistics indicating that more than 200,000 jobs have been created in the electrified vehicle field. And that number is growing fast as new companies like Solid Power enter the field and established manufacturers shift resources to develop their own technologies. The Colorado firm just this week announced plans to enter an alliance with BMW. Meanwhile, Toyota and Mazda plan to open a new U.S. factory that will, among other things, produce a new line of EVs.

(Click Here to see more about VW’s plans to spend as much as $40B on EVs and autonomous vehicles.)

While Congress may have given the battery-car tax credits a reprieve there is no sign lawmakers are planning to extend the incentives. And some automakers are already facing the prospect that they will lose that selling point in the not-too-distant future.

The current law means they are only available on the first 200,000 qualified vehicles a manufacturer sells. They then run out at the end of the calendar quarter and are reduced by 50% during each subsequent six-month period until they expire entirely.

If Tesla can solve its ongoing problems producing the Model 3 and come anywhere close to its target for 2019 – originally more than 500,000 vehicles, including the new, mainstream battery-car and older Models S and X – it would likely lose the credits quickly. Nissan and General Motors could hit their limits, at least for the full $7,500 incentive – in 2018 or 2019, based on their own expanded sales targets.

Incentives have clearly been shown to help build the EV market. Georgia pulled the plug on its own, $5,000 EV credit in June 2015 – while also adding a new, $200 registration fee – and battery-car sales plunged 90% during the rest of the year.