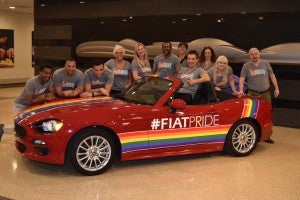 Carmakers face challenges in recruiting talent in today’s tight market and Detroit has a daunting reputation to live down in many parts of the world.

But the Human Rights Campaign, which monitors how employers treat LGBTQ employees, has given nine automakers a 100% rating on HRC’s 2018 Corporate Equality Index.

The annual CEI report rates employers on their LGBTQ workplace policies and benefits. A 100% rating indicates a company provides full parity for domestic partner benefits, not only in basic medical coverage, but in dependent care, retirement and other benefits that affect the financial and medical well-being of families.

“FCA US is proud of our longstanding support of our LGBTQ employees, customers and communities,” said Kelly Tolbert, head of Diversity, FCA US LLC. “Our consistent record of providing an inclusive work culture and benefit parity for our LGBTQ employees represents our core belief in the talents and potential of our people.”

The company was the first automaker to offer domestic partner benefits to employees in 2000 and has attained a 100% CEI rating 11 times since the benchmark was established in 2002.

In many parts of the U.S., LGBTQ rights remain a controversial issue despite a Supreme Court Ruling that has made gay marriage legal despite protests from a variety of religious groups.

“Solid performance by FCA US on the Corporate Equality Index demonstrates the Company’s commitment to creating and sustaining a supportive and inclusive work culture,” said Kelly Hanlon, chair of GALA, the Gay and Lesbian Alliance at FCA US. “Scoring a 100% on the CEI has been a source of pride for the company, especially its LGBTQ employee community.”

GALA is one of seven business resource groups at FCA US. These employee-directed groups pursue initiatives that celebrate multicultural differences and bring value to the larger community through volunteer, charitable, career-building and strategic activities. GALA’s objectives include promoting a positive awareness of LGBTQ people and issues within FCA US and to ensure that the Company’s products and services are tailored to diverse customers.

(Click Here for details about the FCA/UAW training center investigation.)

“Across the country, Toyota partners with, and invests in a variety of organizations to help build positive, affirmative environments in which the diverse members of our communities, including LGBTQ, can live and make stronger contributions towards an ever-better society for all.”

Toyota was one of the first automakers to offer domestic partnership benefits, making them available in 2002. A 100% rating also signifies coverage for transgender individuals for medically necessary care — a community the HRC notes has historically been overlooked.

The HRC, the largest civil rights organization in the U.S., rated nearly 1,000 employers for the 2018 report, including the entire Fortune 500. The top-rated businesses span nearly every industry and major geography of the U.S.

According to the 2018 report, “since the CEI’s inception in 2002, America’s largest employers, including so many with a global footprint, have embraced LGBTQ inclusion as a best business practice. Protections for employees on the basis of sexual orientation and gender identity are now non-negotiable components of business operations.”