Ford CEO Hackett Says “No Dumb Cars” in the Future 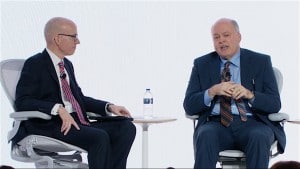 Ford CEO Jim Hackett, right, told attendees at the Michigan CEO Summit that evolving with technology is key to the automaker's long-term growth.

Ford CEO Jim Hackett today continued to push his belief that automakers must evolve or be left by the roadside when it comes to mobility and technology.

“Ford’s future is not about giving up the car,” Jim Hackett, the automaker’s chief executive officer, said at the Business Leaders for Michigan’s 2017 Michigan CEO Summit in Detroit. “I’m here to tell you that. I’ve told the company that, but there’s no dumb cars in the future.”

Hackett assured attendees that Ford will be a part of that future, but it will require some forward thinking not only of the part of employees, but also by investors as well. He used a simple chart showing the evolution of how mail and packages were sent across the country to make his point.

He noted that originally, the Pony Express handled those duties more than 100 years ago, but when rail transportation became more commonplace, it picked up those duties. He said Ford needs to make sure it’s the next best thing, rather than the Pony Express.

(Ford signs on for new EV venture in China. For the story, Click Here.)

“Imagine the board meeting I go into if I’m CEO of the Pony Express and say ‘I’ve got this great idea. We’re going to get rid of the pony.’ It wouldn’t have gone over very well. But the scientists who study this say that’s the cycle of disruption, which is the virtue that is holding your advantage may go away.”

Hackett, who took over as CEO when Mark Fields was ousted earlier this year, has been pushing the automaker to expand its involvement in the development of connected cars and electric vehicles on a global scale.

Just months after General Motors decided to pull out of the Indian automotive market Ford partnered up with Mahindra & Mahindra in hopes kick-starting its struggling operations there. The new alliance has a three-year sunset clause, which suggests that Ford remains concerned about the long-term prospects of remaining in India.

(Click Here to steal an early look at the 2019 Ford Ranger.)

Not only is Hackett looking to grow his business globally on new technology, he’s revamping the way Ford looks at what it does and how it does it. Hackett told the audience that the need to acquire and interpret large volumes of data is critical to the automaker’s development. It’s also a pivotal for other companies too.

“If you’re going to do business with Ford in the future, you’re going to need that kind of capability,” he said. “We need it. So we’ve built a big data analytics group and we’ll take anybody you can give us … that have data science (backgrounds).”

He also noted it’s important for the automaker to realize it has shortcomings in certain areas and that it’s ok because it can be remedied.

“We’re not know-it-alls, we can be learn-it-alls,” he said. “We can learn from everybody in the world and it doesn’t make you less of a capable person.