Barra Commits to 1M EVs on Global Roads by 2026 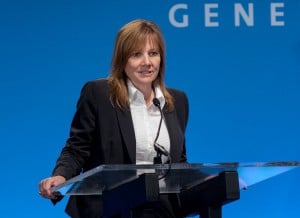 GM CEO Mary Barra said the automaker will have 1 million EVs on roads around the world by 2026.

General Motors is following in the footsteps of former President Barak Obama by promising to build 1 million electric vehicles.

Obama’s vision wasn’t fulfilled, despite the $7,500 tax credit designed to make the cars more affordable and lure EV buyers to showrooms, but GM CEO Mary Barra told analysts at the Barclays 2017 Global Automotive Conference in New York, that GM will hit the target by 2026 on a global basis.

Barra’s confidence stems from two things: a new family of EVs and a significant cost reduction on batteries.

The company, which currently sells the Chevy Bolt EV, will expand its EV platform to “multiple brands and multiple segments,” she said. Barra said the new products will include two small crossovers in 2020.

(Fewer autos will drive more miles and use more oil by 2040, study says. Have a look, Click Here.)

The million-vehicle target on global basis is possible in large measure because of China’s push for electric vehicles. In fact, Matt Tsien, GM China’s president, said yesterday the company will be the first to meet the government’s sales mandates without having the sell NEV credits to do so.

The second portion of this two-pronged attack will be the availability of cheaper batteries. The company said it will cut costs by approximately 30%. GM expects the cost of battery cells on its next generation of EVs to dip to $100 per kilowatt-hour from the current cell cost of $145 per kilowatt-hour.

In addition to being less expensive, GM said the new batteries would hold more energy and charge quicker. The automaker wants to push the range past 300 miles. Currently, the aforementioned Bolt tops out at 238 miles.

Barra said the company was “the only fully integrated developer of AVs with true scale capability.”

“We are not capital constrained in our EV or AV development,” she added.