A Substation on Every Corner? Mass EV Charging Could Pose Some Electrifying Challenges

Will motorists continue to do most charging at home or office? 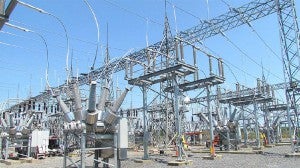 An EV charging station the size of a Costco or freeway truck stop gas station would require an electric substation to provide enough power.

The auto industry is getting ready to plug into battery power in a big way. In recent months, virtually every major automaker has announced some form of “electrification” and, by the middle of the coming decade, conventional hybrids, plug-in hybrids and pure battery-electric vehicles could account for nearly a third of all new vehicle sales – even more if California regulators ban the internal combustion engine entirely, as they’re now considering.

But this dramatic shift raises plenty of questions, including one of the most basic: where will American motorists plug in? And where will all the energy come from to charge up millions of new plug-based vehicles?

While proponents see the shift to battery power as a way to clean up air pollution and reduce our dependence on foreign oil, skeptics fear it could put a massive strain on the nation’s electrical grid requiring billions of dollars in new infrastructure including the addition of many new generating plants. Potentially worse, that could actually increase pollution problems, they warn, especially if those plants were to rely on coal. 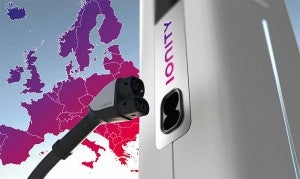 In Europe, Ford and three other automakers plan a continent-wide network of fast chargers.

When you add them all up, hybrids, plug-ins and pure battery-electric vehicles, or BEVs, accounted for less than 3% of all the vehicles sold in the U.S. in 2016. The numbers have been rising this year, and is expect to surge with the arrival of more long-range models such as those coming from Audi, Ford, Nissan, and Volkswagen. Tesla alone is forecasting 2018 will see sales of 500,000 BEVs, primarily its new Model 3, or about six times its previous annual record.

There is beginning to be a moderate network of regional chargers, especially in areas where sales of plug-based vehicles has been strongest: states like California, Florida and Georgia. But “there is no good U.S. long-distance road trip network today,” other than one Tesla is setting up specifically for its owners, said Anton Wahlman, an analyst and investor following the electrified vehicle market.

That’s also expected to grow, in part, ironically due to the Volkswagen diesel scandal. The automaker committed to spending $500 million over just the next 30 months to back the development of a charger network, a program called Electrify America. Along with other government and private initiatives, said Wahlman, we could reach a point in the coming decade where “’coverage’ will no longer be the main problem and ‘capacity’ will be the big issue.” 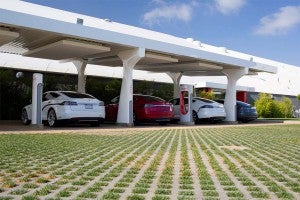 Tesla is expanding its Supercharger network in the U.S. and wants to convert them to solar power.

There are somewhere on the order of 120,000 gas stations in the United States, according to industry data. The question is whether we will need to essentially duplicate that vast and convenient network with charging stations.

A one-for-one match would be a major challenge, according to Pasquale Romano, the President and CEO of Chargepoint, Inc., which claims to operate the world’s largest vehicle charging network. Even a modest-sized station, with six high-speed chargers – capable of “filling up” a battery in under a half-hour – would draw “a couple of megawatts,” said Romano, and would “need an electrical sub-station next door.

A major charging station, like those at big freeway interchanges or Costco outlets, would draw as much power as the data centers used by Internet giants such as Google. In turn, experts add, a nationwide network could require dozens of new power plants or massive new investments in solar and wind farms.

That would be the scenario, anyway, if we were to duplicate the existing refueling system, and if motorists were to charge up their battery-cars just like they gas up today. But many believe that even as plug-based vehicles become the norm, we’ll see a major shift in consumer behavior.

(New BCG study forecasts 50% of vehicles sold in 2030 will be “electrified.” For the story, Click Here.)

A key question is whether EV owners will charge up at home or office, or shift to public chargers.

Today, 85 to 90 percent of BEV and plug-in hybrid owners tend to do the vast majority of their charging at home overnight, occasionally topping off their batteries at the chargers popping up at more and more workplaces, said Dave Schembri, the CEO of the other major U.S. charging company, California-based EVgo.

The debate is what will happen as millions more battery-cars take to the road. “More and more will not be able to charge at home of office, so dependence on public chargers will grow,” said Schembri. But he quickly added his belief that the U.S. will never need as many as chargers as it does gas pumps.

Charging at home offers major advantages, both to EV owners and to the electrical grid. Overnight electrical demand is generally far lower than during the day, and even today’s generating capacity is believed sufficient to handle millions more battery-based vehicles, experts believe. In fact, utilities typically offer lower rates for dedicated EV chargers, encouraging overnight charging. In some cases, that’s as little as two cents a kilowatt-hour, or barely 10% of what commercial EV stations often charge during the day.

Charging up at home isn’t as fast as with the latest public high-speed chargers. Even with a 220-volt “Level 2” system, a motorist might only be able to add another 50 to 100 miles of range overnight, but that’s more than enough to top off a battery for most American motorists who typically drive less than 50 miles a day. 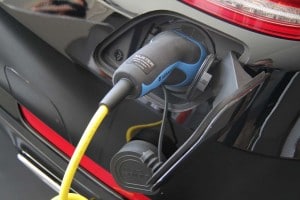 Charging at home is slower but cheaper.

Chargepoint’s Romano believes that the most likely scenario, a decade out as EVs become the norm, rather than the exception, will see most drivers charging up at home overnight or at their offices during the day and only turning to public chargers for longer trips, such as vacation travel. This scenario, he stressed, relies on the shift to the long-range vehicles like the Chevrolet Bolt EV and Tesla Model 3, getting more than 200 miles per charge. And, indeed, automakers expect to soon phase out most short-range models as batteries get better and costs continue to drop.

To keep EV owners charging at home – and to reduce the need for a major expansion of the country’s electrical infrastructure – some states and a number of municipalities, such as Santa Monica, California and New York City, are now requiring the installation of chargers with new homes, apartment buildings and even parking structures.

But there’s also a big push to develop the public charging network to make it easier for battery-car owners to “fill up” on the fly. Tesla’s proprietary Supercharger network is seeing so much demand there are often lines of motorists waiting at peak hours along heavily traveled routes like California’s I-5 between Los Angeles and San Francisco.

Adding more chargers will help, but so will the development of next-generation hardware. For a 200-mile range, using a home or public 220-volt Level 2 charger can take as long as a day if the battery is completely drained. New high-speed chargers can give an 80% charge-up in under an hour. EVgo is focusing on those Level 3 chargers at its public stations, while “future-proofing” its facilities to handle even more advanced – read high-speed — technology in the years to come.

That future is coming fast. Toyota is hinting it will replace current lithium-ion batteries with next-gen solid-state batteries when it launches a new line of electric vehicles in 2021. Some experts forecast that technology could boost range to over 300 miles while reducing charging times to as little as 10 minutes, or more like what it takes now to fill up a gas tank.

That raises the question of whether motorists will fall back on old habits and simply charge up during the day once or twice a week. The answer to that question could determine whether or not we’ll need to spend tens of billions of dollars to expand the country’s electrical grid and add new sub-stations on seemingly every corner.

(A version of this story first appeared on NBCNews.com.)