Spare Me? Not So Fast

Almost a third of new vehicles no longer come with a spare tire. 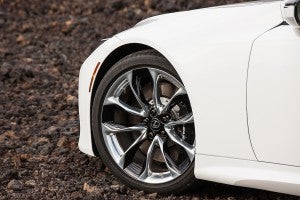 Some manufacturers have eliminated the spare tire in favor of run-flat tires, such as in the Lexus LC 500.

There are few things more frustrating than being stuck on the side of the road with a flat tire – unless, that is, you also don’t have a spare.

In an effort to reduce weight, improve fuel economy and, yes, in some cases to save money, automakers have been cutting back the number of models equipped with spare tires, though they also note that they’re doing so on products like the new Lexus LC 500 sports coupe in order to give owners more cargo space.

The silver lining is that today’s tires tend to be more rugged and reliable, and many vehicles are now equipped with run-flat tires that are designed to keep going for as much as 50 miles if they lose air pressure, enough to get to a service station for a repair or replacement, the manufacturers claim.

“Having a flat tire can be a nuisance for drivers, but not having a spare could put them in an even more aggravating situation,” said John Nielsen, managing director of Automotive Engineering and Repair for AAA. “This can turn the relatively routine process of changing a tire at the roadside into an inconvenient and costly situation that requires a tow to a repair facility.”

According to AAA, 28% of the vehicles sold during the 2017 model-year skipped the spare, whether a conventional full-size replacement or a mini-spare. That’s actually a sign that the shift from spare-less vehicles may be winding down, at least in part due to widespread consumer concerns about the practice. During the 2015 model-year, the organization noted, 35% of new vehicles came without a spare. 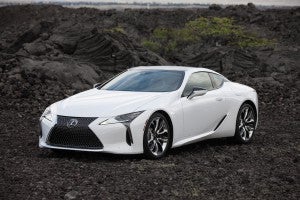 The Lexus LC 500 is one of many vehicles using run-flat tires.

But don’t expect the spare to make a complete return, manufacturers stress, and for a variety of reasons. This is true in many compact cars, especially sports cars like the Lexus LC 500. That new sports coupe has almost no space to put a spare and even with a mini a motorist would be hard-pressed to find room for a couple bags of groceries.

Even on larger vehicles, manufacturers are being forced to cope with increasingly stringent new emissions and mileage regulations. One of the best ways to do so is by cutting mass. Even on a vehicle the size of a Honda Civic, the spare tire and jack can weigh in at over 25 pounds. On a large SUV the number can double.

One alternative is the run-flat tire. They use extra-thick, reinforced sidewalls that allow a motorist to keep going should they lose pressure, typically for at least 50 miles.

Run-flats aren’t cheap to replace, and some motorists complain that they deliver a harsher ride than regular tires with more compliant – flexible – sidewalls. Newer run-flat designs have improved ride comfort, however.

The other alternative is a spare tire inflation kit. In some cases, that’s simply an air pump to fill back up a tire that’s simply lost some pressure. But the most common approach also introduces some form of foam sealer that closes up a nail or other puncture wound to the tire.

Nonetheless, “With low-profile tires and the elimination of a spare tire, many newer vehicles are especially vulnerable to roadside tire trouble,” Nielsen said. “AAA urges drivers to make it a priority to check their vehicle’s equipment and know what to do if faced with a flat tire.”

The organization offers a handful of tips for motorists, especially those buying a new or used model:

Not surprisingly, AAA also recommends signing up for a roadside service plan – though it is just one of many vendors and a number of new vehicles include roadside service in their warranty coverage.

(To see more about the secrets revealed from the leak of the 2018 Jeep Wrangler user guide, Click Here.)