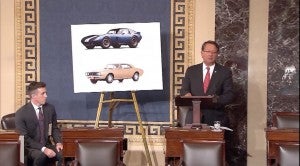 In a rare show of bipartisanship, the Senate Commerce Committee Wednesday unanimously approved the AV START Act, a measure aimed at speeding up the development of both self-driving and fully autonomous vehicles.

The measure, which now goes to the full Senate for approval, is the upper chamber’s version of the SELF DRIVE Act passed by the House of Representatives last month. If, as expected, the Senate gives AV START its blessing, the two chambers will have to reconcile differences between the two bills before the push to promote self-driving vehicles becomes law.

One key area where House and Senate will need to compromise is on issues related to cybersecurity. To satisfy Senate skeptics, the Commerce committee added language requiring automakers to develop security measures to prevent tomorrow’s smart cars from falling prey to hackers.

The bill, as now revised, would allow automakers to test as many as 80,000 autonomous vehicles annually within three years of its formal enactment, exempting them from most state and federal safety regulations.

“This is cutting-edge technology that is advancing extremely fast,” said Michigan Democrat Sen. Gary Peters. “It’s going to happen a lot sooner than people realize. This is not decades – it’s a matter of a few years.” 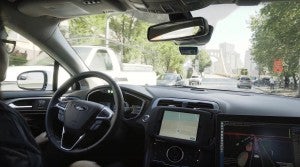 AV START will help accelerate the development of autonomous vehicles, say its proponents.

Co-sponsor of the bill, along with Commerce Chairman Sen John Thune, a South Dakota Republican, Peters said, “The most important part of this legislation is it allows for innovation.”

Proponents say the measure, which must now be approved by the full Senate, will greatly reduce highway accidents, injuries and fatalities while also improving the flow of traffic in increasingly crowded urban areas. Renault-Nissan Alliance CEO Carlos Ghosn, has said that autonomous vehicles will ultimately usher in an era of “zero fatalities.”

Currently, automakers hoping to test their increasingly sophisticated self-driving technologies have to navigate a maze of federal and state regulations. About a half-dozen states have either passed rules permitting testing of autonomous vehicles on public roads or ruled that existing laws authorize such tests.

Proponents of self-driving technology, such as Renault-Nissan Alliance CEO Carlos Ghosn, contend that autonomous vehicles will ultimately usher in an era of “zero fatalities.” They also contend that such vehicles will be able to better use existing roadways, significantly improving traffic flow and, in the process, improving fuel efficiency.

But not everyone is so sanguine about a measure that would allow automakers to do things like disable a vehicle’s airbags, steering wheel and pedals when operating in driverless mode. A number of consumer and safety advocates, such as California-based Consumer Watchdog, argue that while the technology may eventually pay off it is too soon to be testing it in large numbers on public roads.

“The public will be the crash dummies in this experiment,” Joan Claybrook, former head of the National Highway Traffic Safety Administration, told reporters on a telephone conference call this week.

Whether such criticism will sway the full Senate at a time when majority Republicans are pushing for a rollback of regulations is uncertain. And the proposal has also seen a split among safety and consumer advocates, some contending that the proposed measure will ultimately benefit millions of Americans, including many who now have only limited access to personal mobility.

“Autonomous Vehicle technology presents tremendous potential benefits for the blind and other Americans with disabilities,” said Mark A. Riccobono, president of the National Federation of the Blind. “From more reliable transportation to greater access to employment, automated vehicles could be a valuable tool allowing the blind to live the lives we want. Autonomous Vehicle technology must be accessible to everyone through nonvisual user interface options and nondiscriminatory public policy.”