California EV maker facing margin crunch as it struggles to claw into the black. 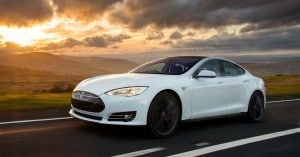 Tesla's Model S is facing pricing issues, in part, due to increased competition, like the upcoming Porsche Mission E.

For Tesla, the good news is that there are more than enough buyers standing in line for the new Model 3 than the California carmaker can handle through at least early 2019. The bad news is that demand has been sliding for the older Models S and X, forcing Tesla to slash prices by as much as $30,000.

And the challenge could soon get even tougher – for both Tesla’s high-line and lower-end products – as a flood of new competitors enter the market.

That includes the Porsche Mission E, the German maker’s eagerly awaited first battery-electric vehicle. Set to go on sale in 2019, the German automaker’s CEO this month said that it will enter the market with a base price of “an entry-level Panamera,” or somewhere just south of $90,000. That would position it right on top of the base Tesla Model S.

That appears to be one reason why Tesla’s stock price, which recently peaked at $385 a share, has tumbled hard over the past week, to just under $345 as of midday Monday. It’s now in the midst of its worst downturn in months.

(To see more about Tesla cutting prices for a second time in as many months, Click Here.)

It didn’t help that analysts at Jefferies Research swing into bear territory, predicting that Tesla is likely to continue losing money through at least 2020.

Investors have been skittish for months, but also buoyed by some of Tesla’s recent news, especially the launch of the Model 3. Shares slumped 11% in July, then jumped 10% in August. And this month has so far been a rollercoaster ride, with the stock plunging fast.

One of the concerns is the pace at which the Model 3 will roll out. There are some indications – on which Tesla so far hasn’t commented – that the launch is in keeping with earlier product introductions, especially that of the Model X electric-SUV, which suffered quality snags and line-speed slowdowns. That would be a big headache for Tesla and CEO Elon Musk who promised that 2018 would see overall sales of 500,000 vehicles, about five times more than the company has ever produced in a single year.

But the more immediate question is what is happening with Tesla’s older product lines. There were already some snags during the first half of the year, and Tesla is now hinting of further problems as it tinkers with price cuts clearly aimed at shoring up sales. A number of analysts had questioned whether the debut of the Model 3 would cannibalize demand for the bigger Model S and even the Model X ute.

At the end of August, the carmaker announces its second price cut in two months, discounting the longest-range P100d models by as much as $5,000. But there have also been reports online that Tesla is wheeling and dealing and discounting by as much as $30,000, while also lowering interest rates.

There had been some concern that the new Model 3 might run into problems squaring off with the Chevrolet Bolt EV, which beat it to market by nearly three quarters. So far, that hasn’t appeared to be a problem, sales of the Chevy electric lagging even parent General Motors’ modest expectations.

But that trickle of competition is now turning into a flood. At the low end, Nissan has launched a second-generation Leaf, with prices starting at under $30,000 for a vehicle equipped with a 150-mile battery. A 225-mile version will launch in mid-2018 and is expected to still undercut the base Model 3.

(Click Here for details about Tesla’s string of recent setbacks.)

Then there’s the Porsche Mission E. In an interview with Britain’s Car Magazine, CEO Oliver Blume said it will carry a base price in line with the bottom-end Panamera, around $80,000 to $90,000. He also noted the production Mission E will be “very close to what you saw two years ago at Frankfurt (Motor Show),” where the concept version debuted.

The Tesla Model S will retain at least one advantage over the Porsche electric sports car. The 2+2 will need about 3.5 seconds to hit 60, more than a second slower than the Model S equipped with optional Ludicrous Mode. But that added feature widens the price gap even more. And it is unclear if Porsche will eventually add a higher performance package for Mission E.

Several insiders have hinted that Porsche will still be able to bill itself as the performance leader. The Model S is primarily a straight line racer, an electric muscle car, if you will, and on the track it tends to slow down as its computer control system compensates for battery and motor overheating. The German maker reportedly has designed the Mission E to do what Porsches are known for, meaning a combination of handling and acceleration over sustained runs.

Under the skin, the Mission E will use twin motors to create a through-the-road all-wheel-drive system. But what may be the biggest plus is the claim that it will be able to use a 350 kilowatt Level 3 charger to top off its battery pack – and deliver another 250-plus miles of range – in as little as 15 minutes. According to Porsche, it relied on its Le Mans 919 hybrid race car to develop the technology to handle such fast charging.

(Porsche’s performance plans include room for battery power. Click Here for the story.)

The Porsche Mission E has frequently been billed as a “Tesla killer.” Few really believe that the arrival of the electric sports car will take down Elon Musk and company, but by contributing to its rival’s cost-cutting push it will clearly make it tougher for Tesla to get into the black. And, with at least 15 to 20 other long-range battery-cars and –utes coming by 2020, the situation could get tougher still. Should Tesla face long-term problems with quality and production snags on the Model 3 it could find investors growing increasingly wary as losses mount.