Takata's scandal is ultimately expected to cost $9 billion, according to some Japanese reports.

Blamed for the largest safety recall in automotive history and hammered by over $1 billion penalties and other costs following a guilty plea in U.S. federal court, Takata Corp. filed for bankruptcy overnight, most of the assets of the company being sold to Key Safety Systems, a Chinese-owned automotive supplier based in Sterling Heights, Michigan.

Takata has been blamed for knowingly marketing faulty airbags that can improperly inflate during a crash, sending plastic and metal shrapnel into the passenger compartment. At least 16 people are known to have died due to the defect, most in the United States, with more than 100 others injured.

Nearly all automakers have used at least some of the faulty bags, from niche players like Rolls-Royce and Ferrari to major manufacturers such as General Motors, Volkswagen and Honda. It has been estimated that a quarter of the light duty vehicles in use in the U.S. use Takata airbags. Currently, about 42 million are or will be recalled, as federal regulators are staging their safety campaign, targeting older vehicles first due to a shortage of replacement airbag inflators. Tens of millions of other vehicles are being recalled outside the U.S.

The bankruptcy filing comes less than six months after Takata pleaded guilty in U.S. District Court in Detroit, agreeing to a deal worth approximately $1 billion. Key will largely be indemnified from additional penalties, though the $1.6 billion that it is paying for Takata’s primary assets will help fund two portions of the settlement.

High schooler Huma Hanif was one of at least 16 killed by faulty Takata airbags.

(Not all airbag recalls involve Takata. Click Here for more.)

That includes $850 million meant to reimburse automakers for the costs related to the ongoing airbag recall, along with a $125 million victims’ compensation fund Takata has set up. The fund was original supposed to be managed by Robert Mueller, but the former FBI Director is now overseeing the Justice Department Investigation of Russian hacking of the 2016 presidential election. Mueller has been replaced by Kenneth Feinberg, the compensation expect who also oversaw the 9/11 victims’ fund, as well as one set up for those affected by faulty General Motors ignition switches.

The sale is also expected to lead to a speed-up of the recall process which has been going painfully slowly, according to the National Highway Traffic Safety Administration. The latest government data shows only about 38% of the vehicles with defective Takata Airbags have yet been repaired. One reason is a shortage of replacement inflators, something expected to be addressed by the bankruptcy sale. But the other challenge is finding the owners of all the vehicles covered by the recall. They tend to be older models that may have been sold several times, making the process difficult.

The sale “will accelerate the removal of dangerous airbag inflators,” said Peter Prieto, the court-appointed Chair Lead Counsel for many of the consumer plaintiffs taking legal action as a result of the Takata problem. Along with going after Takata itself, many have filed lawsuits against the automakers that have used the supplier’s airbags. Toyota, Subaru, Mazda and BMW have already reached settlements, but other cases are pending.

A Takata airbag shown after a crash.

Not everyone is pleased with the terms of the sale, some experts warning that there could be many victims who will not receive full, perhaps even any, compensation.

Automakers are likely also to recover only a fraction of their recall-related costs, especially if they reach large settlements with consumer victims, according to Karl Brauer, an analyst with KelleyBlueBook. “It’s likely every automaker involved in this recall will have to subsidize the process because the value of Takata’s assets isn’t enough to cover the costs of this recall,” he said.

According to some Japanese media reports, the ultimate cost of the Takata scandal is expected to reach $9 billion, though the supplier declined to comment on that figure.

The problem with Takata’s airbags dates back to the 1990s when, it was initially believed, manufacturing defects occurred at two North American plants. That made the devices particularly vulnerable to being used in regions with high humidity, such as Southern Florida. But as reports of malfunctions in drier, cooler climates began to surface, recalls were expanded nationwide, and overseas.

A task force funded by some of Takata’s automotive clients subsequently concluded that the problem has to do with the basic chemistry used for the supplier’s airbag inflators: explosive ammonium nitrate. Data gathered by NHTSA shows that, for vehicles over a decade old, the chance of a malfunction is over 50 percent.

“Takata has deep management talent, a dedicated work force and a long history of exceptional customer service,” said Jason Luo, President & CEO of Key Safety Systems, which has its U.S. headquarters based in the Detroit suburbs. 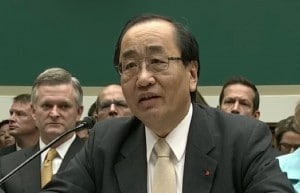 Takata Senior VP Hiroshi Shimizu testifying before Congress in 2015. He now says barely a third of the faulty airbags used in the U.S. have been replaced.

The Chinese-owned company said it plans to retain the 60,000 Takata employees who are currently based in 23 countries.

“The combined business would be well positioned for long-term success in the global automotive industry,” Takata CEO Shigehisa Takada said in a statement.

It took years to fully identify there was a problem with airbags made by Takata, a company founded in 1933. The first signs of trouble came in 2008 with the recall of just 4,000 vehicles by Honda. But the crisis escalated as further reports of malfunctions, deaths and injuries began to surface.

Authorities now believe Takata insiders became aware of the defect as early as 2000 but took steps to cover up the data indicating a problem. That led to three of the company’s executives being charged with conspiracy and wire fraud at the same time the settlement with Takata itself was announced in January. But Shinichi Tanaka, Hideo Nakajima and Tsuneo Chikaraish remain in Japan, out of reach of U.S. courts.