Inside Story: How Dodge Got the Demon Up to a Hellacious 840 HP

"Kill everything to make the car faster." 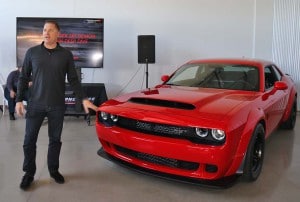 When it comes to the Demon, the devil is in the details, or so a select group of Dodge designers and engineers, operating in secrecy, quickly realized as they set out to develop the most powerful V-8 muscle car ever built. While many on the team had already demonstrated their skills with the development of the Dodge Charger and Challenger Hellcat models, going from a daunting 707 horsepower to 800 or more was a task that required them, in many cases, to start all over, rather than building on what they already had.

The Dodge Demon made its tire-smoking debut at the New York International Auto Show two months ago, and while the Fiat Chrysler Automobiles brand revealed some impressive numbers, it offered few details about what it took to get to 840 horsepower, 808 pound-feet of torque – and a quarter mile time of just 9.65 seconds. On Thursday of this week, several leaders of the team opened the kimono on the project during a background briefing for a handful of media outlets, including TheDetroitBureau.com. (How much for a Dodge Demon? Click Here for the final numbers.)

Dodge has long been locked in a battle for muscle car supremacy with cross-town rivals Chevrolet and Ford, and it rolled out a heavy weapon when it introduced the Hellcat twins three years ago. The question was whether to take things even further – and if so, in what form — said Tim Kuniskis, head of passenger car operations for a number of FCA brands. 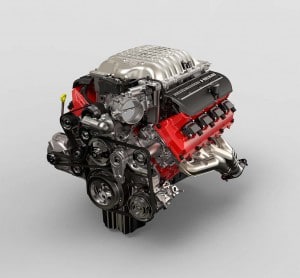 Early on, the plan was to produce an entirely new model that was codenamed “ADR,” short for “American Drag Racer.” But the conversation soon shifted to ways to make the existing Dodge Challenger the ultimate straight-line performance coupe. As work got underway, recalled Kuniskis, the basic rule for the project was simple, “Kill everything you had to kill to make the car faster – as long as it stayed within budget.” Part of the challenge was to keep the project secret. Senior FCA management was determined that there would be no leaks, a rare occurrence in the auto industry. Team members were sworn to secrecy. Work on key elements of the Demon often took place after regular hours when other employees had already gone home. At one point, as the new Demon engine started undergoing testing in the dynamometer lab, the digital gauges were reprogrammed to provide false information. Instead of reading out 840 hp, the equipment said 707, making it look like just another Hellcat engine. “This had to be a surprise to everyone,” said the project’s powertrain chief, Chris Cowland.

(For the NY debut of the the world’s fastest production car, Click Here.)

But getting to that point was grueling and, going in, Cowland admitted not being sure just what the team might eventually achieve. They set out to deliver at least 10% more power than the existing Hellcat, though he personally hoped to hit the magic 800 number. 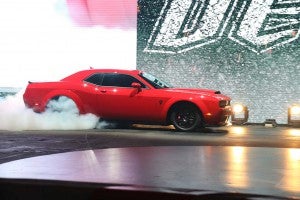 The team also set out the mantra, “nines with air,” a reference to their goal of running the quarter-mile somewhere under 10 seconds while also becoming the first factory stock vehicle to be able to do a wheelie.

At first glance, the Demon engine that Dodge rolled out this week for the briefing looked much like the one in a Hellcat. They both displace 6.2 liters, with massive superchargers designed to pump in the air needed to make such insane levels of horsepower and torque. But a closer inspection revealed that almost every aspect, every part, down to the clamping bolts, were new or modified. According to Cowland, 62% of the Demon engine, by dollar value, has been changed. The development team had to focus on four key areas: 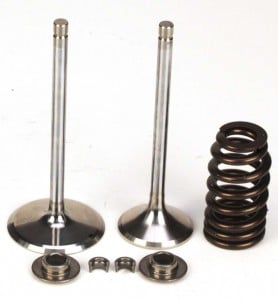 The little bits matter: sometimes it took as little as a 10 micron change to go from "fail" to "pass."

Complicating matters, the Demon was going to be street legal, which meant it had to meet all federal and state emissions standards. It also had to pass drive-by noise standards. And FCA decided it would not be the exception, the Dodge Challenger SRT Demon was going to carry a factory warranty, just like its less powerful sibling models. The list of components and other features that had to be changed could fill a shop manual. Among the key updates, the Demon’s body itself was upgraded to improve breathing, including the addition of an “air-grabber” hood, along with the unusual scoops replacing the fog lamps on more mainstream Challenger models. The displacement of the Hellcat’s supercharger, meanwhile, was increased from 2.4 to 2.7 liters, with modified turbines and charge coolers to boost pressure. To put things into perspective, the supercharger could suck out every molecule of air from Demon’s cabin within the first 800 feet after a dragstrip launch. One of the more novel solutions allows the engine to make use of the Demon’s stock air conditioning system. By cooling the air charge another 18 degrees Fahrenheit, the team added another 10 hp. Getting enough fuel into the engine was a related problem considering that at full acceleration, Demon would drink 1.36 gallons per minute. Compare that to the 2 gpm showerheads in most American homes. Modified cylinder heads, an updated valve train and a hardened and forged alloy crankshaft allowed Demon to redline at 6,300 RPMs, 300 more than the Hellcat. That required such updated as high-strength, heat-conducting aluminum alloy cylinder heads, single-groove collets, and improvements to cooling. 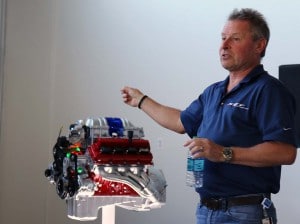 The engine block was the piece perhaps closest to what can be found in a hellcat, but internal pressures would be radically increased, requiring all the parts, including the cylinder head, to be clamped on tighter so the whole package wouldn’t blow apart halfway down the quarter mile. Often, “really small changes made the difference between failure and passing the test,” said Cowland, referring to revisions to parts like the connecting rods and piston jets. In one case, a 10 micron change was all that was required. Getting power out of the engine was actually just the first step. The Demon team then had to “get all that power to the pavement,” said Cowland. That required a variety of driveline updates, including a modified transmission, the torque multiplier able to boost output by 18% while handling higher engine speeds. A new transbrake increased torque reaching the rear wheels to 500 pound-feet at launch. The Demon got a new limited-slip differential, a new final drive ratio. And, completing the package, there were new Drag Radial Tires, only lightly grooved rubber that could maximize grip on the track while still being street legal. In fact, Demon buyers can, for a whole $1, also purchase the Demon Crate, a large, transportable box filled with goodies to further improve performance. That includes narrower front tires, as well as a special engine control chip. 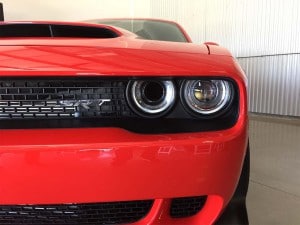 While Demon development focused on the V-8, the stock Challenger got a number of other updates, including the Air Grabber hood.

That chip allows a driver to tap a button on the instrument panel and boost output from 808 hp to the maximum 840. (To get there, drivers also need to be running 100+ octane gasoline.) The Crate, laughs Kuniskis, was a concession to FCA lawyers who ruled against some of the features, including that high-performance chip, being included on the Demon as it rolled out of the factory. While the background briefing helped explain how Dodge got the Demon from concept to production, the remaining question was why do it in the first place, when the Hellcat was already blowing away the competition at the stoplight? “We knew if we could do it really right, more people would talk about us,” explained Kuniskis, even if the Dodge Challenger SRT Hellcat is really only designed for the drag strip. “That’s how you grow (your brand) and take it to the next level.” Getting to the next level is something Dodge seems to always be thinking about, and that raised one other question as the background session started winding down: could the Demon team find ways to pull even more power out of their hellacious new engine? “Hold that thought,” Kuniskis suggested. For now, the team is working with suppliers and its own, in-house Mopar components division on some other nifty tricks. One key goal: getting a fully certified safety cage that will allow Demon owners serious about drag racing to get approved by the National Hot Rod Association. Until then, the Demon is officially banned from competition.