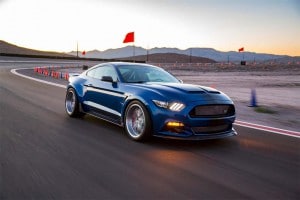 Racer, raconteur, entrepreneur, Carroll Shelby had a nearly half-century affiliation with the Ford Mustang, and almost precisely five years after his death, the company that bears his name has revealed two new high-performance models in his honor.

Fittingly, that includes both the Super Snake Mustang Concept, as well as the Ford F-150-based Super Snake Street Truck. Both will take their formal public bow at a special tribute to Shelby over the weekend, a timely event considering Shelby passed on to the great race track in the sky on May 10, 2012.

The Mustang-based Super Snake Concept starts out as a current stock Ford pony car but undergoes an extensive, top to bottom, inside-and-out makeover.  The goal was to create a car that was street legal but optimized for racing. 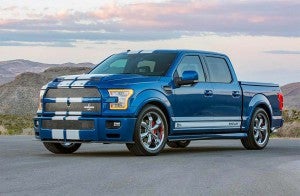 As for the powertrain, the stock Ford 5.0-liter V-8 goes through a number of changes to improve durability and, with the addition of a supercharger, here makes 750 horsepower.

The earlier Shelby Super Snake was a beast when it came to straight line performance. The goal was to go even further with the concept.

Shelby American’s wide body option for the previous generation Super Snake was very popular because it put more rubber under the car to improve traction for drag racing,” says the president of Shelby American. “The current Shelby Super Snake emphasizes handling much more than the last model, which required a new approach with this concept.”

Will we see a production version of the wide-body concept? For now, Shelby officials aren’t saying, but there seems little doubt they’re working up something.

(Big changes coming for 2018 Ford Mustang. To get a look, Click Here.)

Fans won’t have to wait for the Super Snake Truck, however. This modified F-150 will be available with what Shelby American says are “more than 45 high-performance upgrades.” Among other things, they’ll let a buyer choose just how much power to punch out of the pickups 5.0-liter eight-banger: anywhere from 395 to “over” 750 hp.

The list of upgrades includes a unique Shelby hood, rockers, spoilers and grille, as well as a Shelby rear bumper panel and tonneau cover. There’s also a three-year, 36,000-mile warranty and each Super Snake Truck gets a one-off Shelby serial number.

Pricing for the truck has not yet been announced.