Move could impact 1,100 hourly employees, though likely to run less. 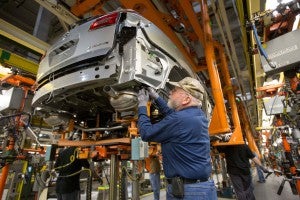 GM filed paperwork warning it would layoff 1,100 workers at its Delta Township Assembly Plant, but says it will be half that number.

With April bringing to four consecutive months the slowdown in U.S. car sales, automakers are beginning to scale back production, a move that is adding up to the first real cutback in industry employment since the end of the Great Recession.

The latest cuts are coming at General Motors, where the Delta Township Assembly Plant outside Michigan’s capital of Lansing, will close this week. The move will be temporary, the plant coming back on line on June 12. But when that happens, the third shift will be eliminated indefinitely.

Ford Motor Co. last week announced plans to cut a shift at its Avon Lake, Ohio assembly plant producing medium-duty versions of the big F-Series pickup. A number of other plants have been dropping shifts in recent months as automakers respond to declining vehicle demand.

The exact number expected to be impacted by the cuts at the Lansing GM plant apparently hasn’t been finalized. The maker initially issued an advisory – dubbed a WARN notice under Michigan law – to 1,100 employees. But a spokesperson for the maker says only about half of those will be impacted once the factory resumes operation in June – minus the third shift.

The factory currently produces the Buick Enclave, Chevrolet Traverse and GMC Acadia SUVs. The latter model will end production this week. The factory will be retooled over the next month to produce new, 2018 versions of the Chevy and Buick models.

About 1,100 employees will be idled for the month-long shutdown, 600 of those put on long-term layoff due to the elimination of the third shift. But perhaps 500 could be brought back to work in early 2018 once production of the next-generation Enclave and Traverse models gets up to full speed, GM spokeswoman Erin Davis told the Detroit Free Press.

That is, of course, assuming that the demand is there for those two models. 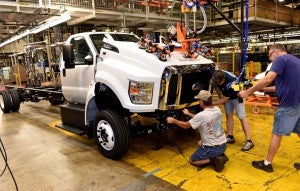 Ford is cutting jobs at its Avon Lake, Ohio plant due a slow down in medium-duty truck sales.

Across the industry, a number of manufacturers are extending their normal summer shutdowns to account for the slowdown in U.S. car sales. That should help bring swelling inventories in line with decreasing demand.

Overall, sales fell 4.7% in April – significantly worse than had been forecast – marking the fourth consecutive monthly decline in the U.S. new vehicle market. Industry analysts have, until now, expected only a very modest dip in 2017 sales after three record years. IHS Automotive, for example, is calling for volumes of around 17.4 million, off about 100,000 units from 2016’s record. LMC Automotive and others have predicted a slightly greater decline, but also have anticipated sales would remain north of 17 million. Some analysts are now questioning whether demand will drop more rapidly.

(Click Here for details about GM adding a third shift at Tennessee plant.)

During an event in Detroit last week, Toyota North America CEO Jim Lentz warned that automakers may have to “lift off the accelerator” if sales continue to slow, after boosting production for the last seven years.

Bob Carter, the head of U.S. Automotive Operations at Toyota, acknowledged that his company’s incentives have been climbing rapidly, as has been the case for most of the rest of the industry. Both executives said they were hoping the $1 trillion infrastructure program promised by President Trump would help kick-start demand, especially in the light truck sector, Lentz suggesting that could boost overall vehicle sales by as much as 800,000 units.

But with the new president struggling to implement any of his promised goals, there is growing skepticism within the automotive community, and that is likely to be followed by further production cuts, a number of industry insiders have told TheDetroitBureau.com.

The cuts are expected to be most severe on the passenger car side, where demand has been falling especially fast. Sedans, coupes, convertibles and sports cars have accounted for barely a third of the overall market this year, down from closer to 40% a year ago.

SUVs alone have gone from 28% of the market in 2006 to about 40% now, noted Mark LaNeve, the head of sales, service and marketing for Ford Motor Co. “We don’t see it stopping,” he said last month, adding that this will lead to significant shifts in production plans, even if overall U.S. car sales level off.