Delphi Partners With BMW, Intel and Mobileye on Autonomous Tech 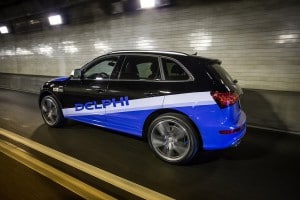 Delphi is teaming with BMW, Mobileye and Intel to develop an autonomous driving system for 2021.

Unlike the old axiom, apparently three isn’t a crowd as Delphi Automotive announced it will join forces with Intel Corp. and Mobileye to help created the platform for BMW’s autonomous vehicle systems in the future.

The deal, which isn’t exclusive, puts Delphi into the role of integrator. It will merge all of BMW, Intel and Mobileye’s automated driving solutions into automaker vehicle architectures. Delphi may also provide software and hardware such as sensors and provide help in other areas as needed.

BMW, Intel and Mobileye announced last year that they would jointly develop a fully automated driving system for production by 2021. The three companies have developed an architecture that could be used by other automakers and mobility companies.

“This is a great opportunity for Delphi to use its technical depth and experience in automated driving and electrical architecture to help the cooperation partners develop and deploy at scale,” Kevin Clark, president and CEO of Delphi Automotive, said in a statement.

(Delphi looking to get Intel inside its autonomous technology. Click Here for the story.)

The move isn’t a big surprise as Delphi already enjoyed a partnership with Intel and Mobileye. The trio teamed up last fall as Delphi and Mobileye N.V. are partnering with Intel to use the company’s computer chips for its in-development autonomous vehicle system.

The new system, which is called Centralized Sensing Location and Planning, is expected to be available by 2019, according to Delphi officials. Intel is slated to deliver the chips late next year. Able to handle processing more than 12 trillion operations a second, they are the final piece to autonomous puzzle.

“Our close working relationship with all three partners serves as a solid foundation for a success,” Clark said.

(Click Here for more about BMW and Mobileye’s relationship.)

The new chips are what will allow the system to sort through all of the data it receives and make decisions about steering, acceleration, braking, etc. The trio expected to develop a system that costs less than what automakers can do it for alone: about $5,000 per car when it’s introduced.

“We want to forward and accelerate the entire industry,” she said.

BMW Group, Intel and Mobileye in January said they plan to deploy a fleet of 40 autonomous BMW cars by the second half of this year. Intel confirmed Tuesday that the companies are on track to hit that goal.