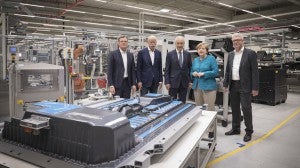 German Chancellor Angela Merkel examines some of the technology that will be used at Daimler's new EV battery plant.

With investments in electric vehicles and batteries continuing to climb in the industrial world, Germany’s Daimler AG has broken ground for a new 500-million-euro battery factory near Dresden that is being described as one of the largest and most modern plants of its kind in the world.

“The automotive industry is facing a fundamental transformation and we see ourselves as the driving force behind this change,” said Daimler CEO Dieter Zetsche.

“The battery factory in Kamenz is an important component in the implementation of our electric offensive. By 2022, we will have more than ten purely electric passenger cars in series. We also continue to drive forward the hybridization of our fleet. Under the EQ brand, we are creating a holistic ecosystem for e-mobility,” said Zetsche, who was accompanied to the ground-breaking ceremony by German Chancellor Angela Merkel.

The new battery plant will be operated by the Daimler’s Accumotive subsidiary and is the second factory for lithium-ion batteries built the German auto and truck maker. The other one is being built in Kamenz.

Overall Daimler has invested one billion euros or about $1.15 billion in a global production compound for batteries in Germany.

“With the second battery plant in Kamenz, we are giving the initial start for the development of the first premium eBattery factory,” said Markus Schaefer, member of the Divisional Board of Mercedes-Benz Cars for production and supply chain. 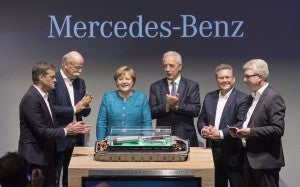 “The local production of batteries is an important success factor in our electric offensive and a crucial element in order to flexibly and efficiently serve the global demand for electric vehicles. This makes our production network very well positioned for future mobility.”

The new production facility, which is situated approximately 30 miles from Dresden, is scheduled to go into operation in mid-2018.

The site is adjacent to Accumotive’s existing battery factory. The new plant will quadruple the production and logistics area in Kamenz to a total of around 80,000 square meters. In the next few years Accumotive expects to increase the number of employees at the site. By the end of the decade, Accumotive will have more than 1,000 employees, twice as many as it does today.

“The German Chancellor’s visit underlines the importance of electric mobility in Germany and the good perspectives for the future location in Kamenz. For our workforce, this is a great signal acknowledging their know-how and top quality performance in the last years. To date, we have delivered more than 80,000 batteries based on lithium-ion technology,” said Frank Blome, managing director of Deutsche Accumotive Gmbh.

The new battery factory will be supplied with energy from a combined heat and power plant and a photovoltaic plant in combination with stationary battery storage units.

Last year, Mercedes-Benz Cars showed off its Project EQ vehicle, which was billed as a prototype for new generation of electric vehicles. Mercedes-Benz is scheduled to launch ten new electric passenger cars are scheduled to be launched by 2022: in all segments from smart to large SUVs.

Zetsche said Daimler expects to invest more than 10 billion euros in the expansion of the electric fleet in the next few years.

The first EQ series model will roll off the line at the Mercedes-Benz plant in Bremen at the end of the decade. In addition to that, luxury-class EQ models will be produced at the plant in Sindelfingen.

Moreover, Daimler has assumed that the proportion of electric vehicles in the total unit sales of Mercedes-Benz will be between 15 and 25% by 2025. In addition to traction batteries, Accumotive will produce batteries for Mercedes-Benz energy storage units and 48-volt-systems. The pioneering 48-volt on-board power supply is celebrating its premiere in the new generation of the S-Class and will be gradually introduced in various model series.

Mercedes-Benz Vans will introduce a series electric vehicles beginning next year. Both Vito and Sprinter will be equipped with drive batteries from Kamenz.

Daimler Trucks also will launch a small series of the Fuso eCanter later this year. This is the third generation of the world’s first purely electrically-driven light truck. Fuso also uses the batteries from Kamenz for the eCanter.

Depending on the design, load and application profile, the 7.5-ton truck has a range of more than 100 km without stationary loading. The Fuso eCanter will be delivered in small series from 2017 onwards. The first 150 units go to customers in Japan, Europe and the U.S.

(Mercedes may enter U.S. pickup market, after all. Click Here for the story.)

Mercedes-Benz is also starting the customer testing of the Urban eTruck, the world’s first full-electric heavy-duty truck. Daimler Buses is launching a full-electric Mercedes-Benz city bus in series production next year. Prototypes are already on the road.