New brand could be U.S. bound - with major innovations in sales, warranty, connectivity. 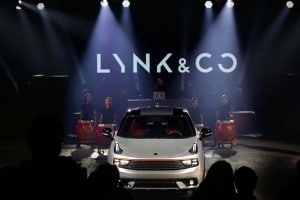 The Lynk & Co. 03 Concept sedan makes its debut at the Shanghai Motor Show.

Lynk & Co. Not exactly a household name – unless you sound it out phoenetically, and it suddenly sounds like a familiar Detroit luxury brand.

For now, it’s the new, mid-range marque that Szechuan-based Geely is slotting in under its Volvo Brand. And, yes, much of what Lynk & Co. will be bringing to market have been directly designed and engineered by, or at least with the help of, Geely’s Swedish subsidiary.

For the moment, the new brand is focusing on the booming Chinese market, but watch this space. The new models being introduced at the Shanghai Motor Show this week just might wind up rolling into the U.S. market in the not-too-distant future. In fact, we could see the Lynk & Co. 01 SUV here as early as 2019 – though, so far, Chinese automakers have failed to meet self-targeted deadlines for entering the U.S. market.

If – or when – Geely’s new brand does make it to the States, it could offer an intriguing new feature, one aimed at the fast-growing alternative mobility market. Both the 01 SUV and 03 sedan concept feature a “Share” button. 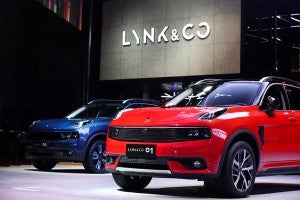 Originally shown in concept form, the Lynk 01 SUV is back in Shanghai in production trim.

Rather than going through one of the existing car-sharing services, such as Car2Go, the owner would press the button to get listed on the Lynk smartphone app to let potential renters know the vehicle is available. They would then use a digital key to operate the vehicle for a set period, the app handling all billing chores. It would also allow an owner to monitor the vehicle remotely.

The first Lynk & Co. model to go on sale is the 01 SUV making its debut in production form in Shanghai. The compact model is largely unchanged from an earlier, compact crossover. If the dimensions seem familiar it’s likely because the ute rides the same Volvo-based CMA architecture used for the upcoming Volvo 40-Series models – which have been shown in concept form in recent months. 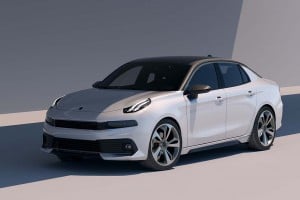 Like the Lynk 01, the 03 Concept shares the same platform as the upcomin Volvo 40-Series.

As for the Lynk 03 sedan concept, it is also believed to be a thinly disguised production model that should roll off the line in little more than a year. That version will share the same Volvo-based CMA platform (as will a number of upcoming Geely-branded models).

Expect the production 03 model to share many, perhaps all, of the same powertrain options as the 01 SUV, Chinese sources anticipate. They also surmise the 03 would join the 01 SUV in the U.S.

Of course, the best laid plans have repeatedly gone astray for domestic Chinese automakers who have so far backed away repeatedly from plans to jump the Pacific. Geely competitor BYD went so far as to set up an American headquarters operation in Los Angeles which, for the last few years, has been relegated to handling hybrid bus sales.

But Americans finally are getting a taste of Chinese products in the form of low-volume import models sold by both Volvo and Buick, so most observers expect it is just a matter of time for domestic brands like Geely to take the leap. The softening of restrictive trade threats against China by Pres. Donald Trump – who this month backed down on labeling the Asian nation a currency manipulator – could throw open the door.

How Lynk would handle U.S. sales is uncertain. It has suggested it may opt for a Tesla-like approach, foregoing traditional franchise dealers in favor of factory stores and even pop-ups in key markets, with regional service centers and valet pick-up-and-return service. 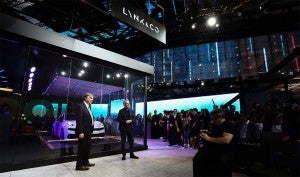 The company has laid out a “promise of a new dimension of vehicle connectivity and shareability, coupled with a revolutionary approach to buying and ownership,” said Alan Visser, the company’s senior vice president, during the Shanghai preview, adding that owners will also get free connectivity and lifetime warranties with their vehicles.

Add the possibility of a pay-as-you-go pricing model, rather than conventional purchase or leasing.

But whether those concepts will work in the U.S. is far from certain – the retail model, in particular, considering the legal trouble that has caused Tesla – which remains banned from a number of states – it remains to be seen if Lynk & Co. could pull it off.

Then there’s that name. While Chinese officials insist any resemblance is coincidental, the folks at Ford Motor Co. privately fume about the similarity of Lynk & Co. to Lincoln. But, one senior executive, asking not to be named, told TheDetroitBureau.com there may be nothing Ford can do, at least in China. There, trademarks are based not on the way a name sounds but how it is spelled, relying on characters, or hanzi, made up of complicated strokes, and so, in Chinese, Lincoln and Lynk & Co. don’t look anything like one another.

Whether that explanation would hold up in an American court is another matter entirely, and Ford is rather protective of its trademarks – refusing to allow Tesla, for example, to name its upcoming small car the Model E, forcing it to opt for the visually similar Model 3. Of all the challenges Geely’s new marque might face coming to the U.S., a face-off with Ford could prove one of the toughest.