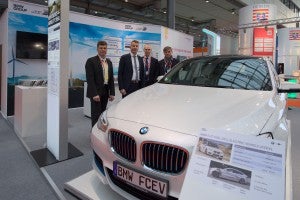 At Hannover, BMW is displaying a 5-Series GT fuel cell model that, it boasts fast refueling times and an ability to cover long distances unlike many battery-electrics.

While fuel-cells are often billed as the most environmentally friendly alternative to the internal combustion engine, there is a dark side to hydrogen power – one that BMW says it hopes to address.

Fuel-cells combine hydrogen and oxygen from the air to produce a stream of current that can run a vehicle’s electric motors. The only exhaust is water vapor. But the issue is where that hydrogen comes from. In most cases, it is produced by breaking down fossil fuels like petroleum or natural gas, a process that creates carbon dioxide and other pollutants.

At the 2017 Hannover Trade Fair, however, BMW is looking at ways to make fuel-cells even cleaner, by producing hydrogen through solar-powered electrolysis, a process that breaks water down into two parts hydrogen, one part water.

BMW has spent years researching ways to use hydrogen in automotive applications. It initially focused on using the lightweight gas as an alternative to gasoline in a modified V-8 engine running a prototype 7-Series sedan. It has more recently shifted focus to fuel cells, in 2013 entering into a strategic alliance with Toyota Motor Co. to combine research and development efforts.

BMW officials said the goal of the projects to establish hydrogen fuel-cell systems as a long-term second source of emission-free mobility alongside battery-electric drive systems. The goal is to create a versatile portfolio of drive systems which can be adapted to different vehicle concepts, customer requirements and legislative circumstances.

At the Hannover show, BMW is displaying a 5-Series GT model that, it boasts, delivers a combination of sporty handling, a high level of energy efficiency, everyday usability thanks to fast refueling times and an ability to cover long distances without the hassles normally associated with battery-electric vehicles. 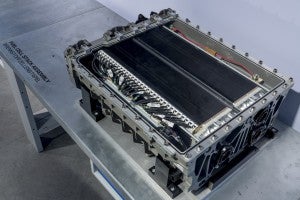 Also on the BMW stand, Shell is demonstrating a prototype of a hydrogen fuelling pump which the energy company has developed in partnership with Designworks, a BMW subsidiary. The fuel pump dispenser illustrates how quickly and easily drivers can fill up their cars with hydrogen – typically five minutes or less.

Not everyone is enamored with the fuel-cell concept. Tesla CEO Elon Musk is fond of calling the technology “fool cells,” and even some environmental groups caution that unless cleaner alternatives are found to produce hydrogen the fuel will continue contributing to carbon dioxide emissions and global warming.

For its part, BMW estimates that hydrogen can be produced by cleaner methods, and it refers to calculations carried out with the Fraunhofer Institute for Solar Energy Systems ISE that demonstrate the benefits of using electrolysis. The energy to split water into its component parts could come from solar power, wind, wave or other alternative approaches, and the Institute contends that would contribute to the German government’s goal of meeting its greenhouse gas emissions reduction targets by 2050.

Among other things, German regulators are considering the prospect of barring the internal combustion engine entirely over the next few decades, a move that would require a shift to alternatives such as fuel-cell and battery-electric vehicles.

BMW has not laid out a timetable for commercializing hydrogen propulsion, but its ties to Toyota suggest it could put a fuel-cell vehicle into production in the not-too-distant future.

Three automakers already have commercial models in limited production: Toyota, Honda and Hyundai, with other brands including General Motors, Daimler’s Mercedes-Benz and Hyundai sibling Kia expected to join the new market segment within the next three to five years.