Roof tiles to debut in April; battery crossover still “a few years away.” 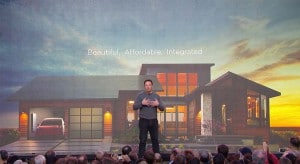 CEO Elon Musk with a model house with a Tesla car, battery-backup system and solar tiles.

Tesla CEO Elon Musk now confirms long-standing rumors there will be an SUV companion to the new Model 3 sedan, but don’t expect to place an order anytime soon, he cautioned in a series of tweets.

The battery-ute will come well after Tesla begins taking orders for a new line of solar roof shingles. A product of the recent acquisition of SolarCity, those power-generating tiles will be part of what Musk envisions to be a range of green energy technologies in the Tesla catalog, including solar cells, electric vehicles and home and office battery backup systems.

“There will be a Model 3 and a Model Y,” Musk told a Twitter follower, adding in a separate tweet that the crossover model will be “a few years away.”

The Model 3 that the ute will share platforms with is set to go into production in July, with retail deliveries not expected to begin until later this year. Tesla already has an advanced reservation bank believed to be in the range of around 400,000 of the compact battery-sedans. 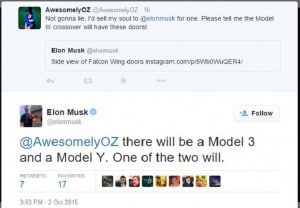 Musk has said he expects Tesla global sales to reach 500,000 in 2018 – including the older Models S sedan and X SUV, and 1 million by 2020. It appears the later target would include the Model Y, but could also cover other products Tesla is reportedly working on, including an all-new version of its original Roadster sports car, and perhaps even a battery-pickup, something Musk has mentioned several times in recent years.

Adding a compact SUV to the Tesla line-up makes plenty of sense, according to industry analysts, considering that is the fastest-growing segment of the American automotive market and gaining ground in most other major world markets, as well.

“We believe the small SUV segment will eventually be the largest segment in the world across all OEMs,” Adam Jonas, the automotive analyst at Morgan Stanley, wrote to clients this week.

The new models could serve a dual purpose, Jonas added, appealing not only retail buyers but companies like Uber and Lyft, or perhaps even a new service to be launched by Tesla itself.

“We also expect Model Y to be at the center of an on-demand ride sharing service,” wrote Jonas, “due to its larger passenger compartment, luggage space, and modular seat configuration.””

The decision to call the new crossover Model Y is far from random, it seems. The original goal, Musk also tweeted, was, “for obvious dumb humor reasons”, to have four stylish vehicles that, when lined up, would spell out “S-E-X-Y.” But, it seems, Tesla couldn’t obtain the rights to its original choice for the upcoming battery-sedan.

So, Model E became Model 3 – which still, sort of, spells out S3XY.

(More headaches for Uber as autonomous vehicle crashes. Click Here for the latest on that story.) 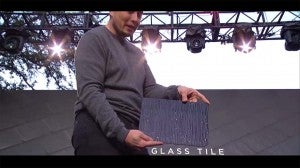 Exactly when the new crossover will be added is unclear, though speculation centers around the 2019 or 2020 model-year. For its part, Tesla claims it doesn’t actually use model-year designations, as it routinely updates its products, but federal regulators require that demarcation in order to confirm compliance with various vehicle standards.

While the car side of the business gets most of the attention, Tesla has been busily expanding its portfolio into other areas of green energy. It is already marketing the PowerWall battery backup system and has begun producing lithium-ion cells at the still under construction Gigafactory in Reno, Nevada.

Meanwhile, it continues to work at integrating the recently acquired SolarCity, the solar cell manufacturing and installation company started by various Musk relatives.

Sales of solar rooftop installations have struggled in recent years, and experts caution that the technology could become even harder to sell if Pres. Donald Trump moves ahead with plans to provide more conventional energy production.

So, Tesla announced last October an alternative approach it claims will be cheaper to purchase and easier to install, replacing conventional roof tiles with solar cells.

But while the new Musk tweet reveals the tiles will go on sale next month, it neglected to say what the price will be. That should become obvious within the next several weeks – possibly through another tweet from the Tesla CEO.

(Why did Tesla drop the base version of its Model S? Click Here to find out.)