A Real Gas: First Drive of the 2017 Honda Clarity FCV

Hydrogen-powered sedan is no lightweight. 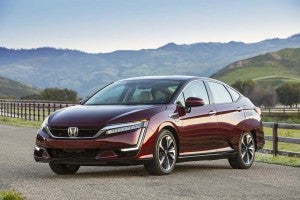 A bit late, but ready to roll. The new Honda Clarity FCV is the latest fuel-cell powered vehicle to hit the U.S. market.

During a visit to Detroit last week, President Donald Trump all but promised the auto industry his administration will roll back the tough 54.5 mpg federal mileage standard set to go into effect in 2025.

Yet while some manufacturers, especially Detroit’s Big Three, issued a collective sigh of relief, others insisted such a move wouldn’t make much, if any, difference in their long-term plans. That includes Honda, whose CEO recently emphasized his commitment to generating two-thirds of the maker’s sales from electrified powertrains by 2030.

“Electric” doesn’t necessarily mean “battery,” however, and Honda has become one of the biggest proponents of fuel-cell technology, the Japanese maker recently becoming the third manufacturer to start marketing a hydrogen-powered car in the U.S. market. This past week, it gave TheDetroitBureau.com a chance to put the new Honda Clarity FCV through its paces traversing the mountainous terrain east of Santa Barbara, California.

For those not familiar with fuel-cells, the technology is surprisingly old, first being demonstrated almost 175 years ago. But it was only during the Apollo moon mission that it found practical application, providing power for the lunar capsules. 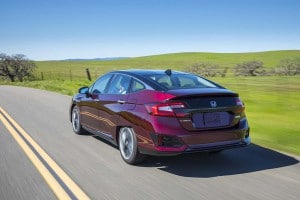 The exterior design was created to maximize efficiency, extending the range of the Clarity FCV.

At its most basic, a fuel cell stack combines hydrogen with oxygen from the air, using a permeable membrane to convert the two gases into water vapor. In the process, an electron is pulled from each hydrogen atom, energy that is then used to run an electric motor. In other words, the fuel-cell system replaces a battery. In fact, some experts like to refer to fuel-cell systems as “refillable batteries.”

That’s one of the key advantages, as we found out, moments after leaving the El Encanto resort Honda used as the base for the Clarity FCV drive. A couple miles away, we pulled into a seemingly regular service station, but over in one corner, a hydrogen pump had been installed – one of about 26 now operating in the Golden State.

Where it can take the better part of a day to recharge a battery, it takes less than five minutes to refill a hydrogen tank. The nozzle is a bit different from what a gasoline or diesel vehicle uses. It has a locking connector to ensure no leaks, and a wireless communications system between pump and car makes sure the vehicle gets a full tank. Releasing the handgrip and completing the transaction, we were ready to go in minutes. 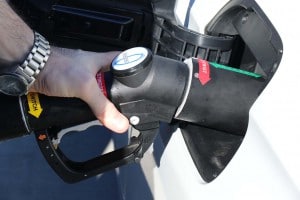 Fueling up the Honda Clarity FCV relies on a pump that looks a little different than a gasoline model.

In the brief moments we were parked and refueling, we had a chance to take a closer look at the new Clarity. With its unique chassis, it will serve as the base for three different Honda powertrain packages, the FCV going hydrogen, the Electric getting an 80-mile battery pack, and the Clarity Plug-in Hybrid equipped with a downsized battery pack capable of delivering 40 miles per charge before firing up the vehicle’s small internal combustion engine.

Visually, the only real difference between each model will be their badges and the number and location of their charging and refueling doors.

For all three versions, Honda opted to go what might be called the “quirky” route first adopted for the Toyota Prius. You know there’s something different about the Clarity the moment you spot it. It looks like someone might have driven it up to Santa Barbara after finishing a week’s shoot on the Hollywood soundstage of a sci-fi flick.

While many of our colleagues found the design over the top, we thought the Clarity reasonably attractive – and appreciated the fact that function was the foremost influence of form. All those odd lines and curves serve a purpose, largely to help reduce wind resistance and improve efficiency. The Clarity is, for one thing, the first sedan to use air curtains for both front and rear. These reduce energy-stealing turbulence around the wheels. 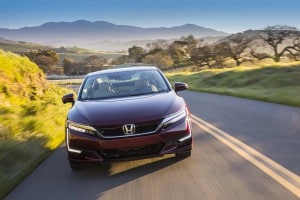 The new Clarity provides plenty of acceleration, but the handling isn't a sharp as it could be.

The 2017 Honda Clarity FCV is actually the third fuel-cell vehicle Honda has offered to the public. It launched the original FCX in 2005, with the FCX Clarity following at the beginning of this decade, though only a handful of those two models were ever leased in the U.S. The new Clarity FCV isn’t aiming to rival the Civic or Accord, but Honda now hopes to produce about 900 annually for worldwide distribution.

The FCV definitely is an improvement. For one thing, the size of the fuel-cell stack has been reduced substantially, now permitting the entire assemblage to fit under the hood. It used to be squeezed in-between left and right seats, so where the old car was a four-seater, the new FCV has a luxury-sized cabin for five.

The new model also is more powerful – and, by pairing the stack with a small, hybrid-size lithium-ion battery, it can deliver a boost in power when needed. Making 174 horsepower and 221 pound-feet of torque, the numbers might seem modest considering the size of the Clarity but, as with a battery-car, all that power comes on instantly, meaning no wait for the engine to rev up. Acceleration is quick and absolutely linear, whether launching off a stoplight or making a quick pass on a back-country road.

Nonetheless, the Clarity is efficient, delivering 68 MPGe, or miles-per-gallon equivalent, combined, with a 67 MPG-e highway rating, and 69 in the city. Range is estimated at 366 miles per tank and, as the numbers suggest, that means the Clarity carries a maximum of just over 5 kilograms (about 11 pounds) of hydrogen.

For comparison’s sake, think one kilogram per gallon. The hydrogen, meanwhile, is now compressed to about 10,000 pounds per square inch, or twice the density of the old FCX Clarity. 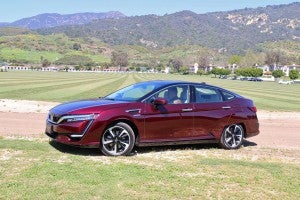 The Clarity is available in limited markets in the U.S., primarily California, which is beginning to expand its hydrogen infrastructure.

Honda and other proponents like to note that the only exhaust gas produced by a fuel-cell vehicle is water vapor. True enough, it is a zero-emission vehicle, just like a battery-car. But there is an asterisk: how clean the vehicle actually is depends on the source of your hydrogen. In most instances, the ultra-light gas is being produced by steam-reforming natural gas. That’s still cleaner than gasoline but does create some CO2 emissions at the source.

Longer term, we could also see even cleaner sources, such as splitting water into two parts hydrogen and one part oxygen through renewably generated electricity, or even from excess heat at nuclear plants.

The more immediate challenge is simply getting hydrogen out to the public. There are currently 26 stations in California, 16 in the Los Angeles-Orange County region, 10 more near San Francisco and Sacramento. By the end of 2017, that could reach nearly 70, and the state has set aside funding to push up to 100 by the end of the decade. Several other states are also considering funding hydrogen distribution networks – as are Japan and Germany.

For now, however, that means where an owner can drive is limited. The navigation system on the Clarity FCV provides a map that shows you where your nearest pumps are located. The $369-a-month lease on the car also provides up to $15,000 worth of hydrogen. Unfortunately, the gas is still quite expensive – about $15 a kg at the Santa Barbara station. One major supplier just announced it would drop that to $10, and Stephen Ellis, the FCV marketing chief, says the industry is targeting parity – a kg of H2 costing the same as a gallon of gas – by around 2020, as production and distribution ramps up. 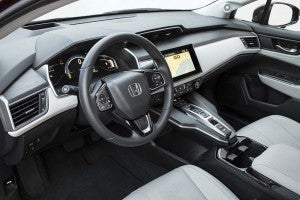 The interior of the Honda Clarity FCV features luxury-vehicle like leather, suedes and other materials.

The Honda lease program also includes up to 21 days use of a luxury vehicle – read Acura – should owners want to take a driving vacation somewhere between the FCV’s reach.

That underscores the fact that the Clarity is far more lavish a vehicle than any current Honda-badged model. In fact, the interior puts most Acura models to shame, with its leather and ultrasuede finishes and natural wood trim.

As for driving, the car’s rapid acceleration also speaks more luxury than mainstream. If we had any gripe, it was the relatively numb steering. Beating the car through those backroad turns took a little more effort than we’d like. The Clarity platform is actually quite capable for the steering doesn’t give any feedback so you’re working the wheel more than necessary.

With that (and the lack of hydrogen pumps) our only serious complaint, we were clearly impressed by what Honda has pulled together. If this is an example of what hydrogen power can deliver we will be watching closely to see what follows the Clarity FCV.

And more, Honda promises us, will come. The maker recently announced a joint venture with General Motors that will see them begin to mass produce the fuel-cell stack by the end of the decade. Expect to see its cost fall, even as its efficiency and performance improve. Hydrogen power, it seems, is finally getting ready for prime time after almost two centuries of development.