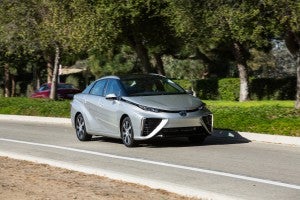 Fuel-cell vehicles will take longer to popularize than other recent green car technologies, such as hybrids, the chairman of Toyota Motor Corp. said during a speech at the World Economic Forum in Davos, Switzerland.

The Japanese automaker has been an active proponent of hydrogen power, last year launching in the U.S. its first retail fuel-cell vehicle, the Toyota Mirai. There are now two other FCVs on the market, including the Honda Clarity and a version of the Hyundai Tucson, with several other automakers expected to bring their own models to market over the next several years.

But while public acceptance of the original hybrid-electric vehicle, the Toyota Prius, was “much faster than we had anticipated,” Takeshi Uchiyamada told a reporter for Bloomberg news, that’s not likely to happen with vehicles like the Mirai, the chairman said, because “the infrastructure needs to be prepared before it becomes major in the market.”

The challenge is not entirely unlikely that the auto industry has faced trying to market plug-based electric vehicles. As they began coming to market early in the decade there was a dearth of public charging facilities and relatively few consumers could do more than plug their vehicles into standard – and slow – 120-volt outlets.

There are only a handful of hydrogen pumps in the U.S., meanwhile, and the vast majority of those are concentrated in three parts of California: Orange County, the San Francisco Bay Area and around the capital in Sacramento.

But while the number of public charging stations is rising fast – including new, Level 3 quick chargers – the pace at which new hydrogen stations are opening has lagged, even after lawmakers in California set aside funds to develop a statewide network.

Toyota has been one of the most active proponents of fuel-cell technology – which combines hydrogen gas with air from the atmosphere to produce a supply of current. In turn, that can be used to power the same electric motors found in a battery-car.

In part, that has reflected the Japanese giant’s skepticism about lithium-ion battery technology. Until recently, Toyota focused on old nickel-metal hydride batteries, like those used in the original Prius. But it adopted lithium for use in its new Prius Prime plug-in model, and last month announced that it would expand its range of plug-based models in the coming years.

That reflects the challenges facing hydrogen vehicles while also recognizing the growing push for battery power. In turn, that is based, in part, on improvements made in lithium-ion and charging technologies. The recently launched Chevrolet Bolt EV is the first model to target a mainstream price segment while also offering a range of 238 miles per charge. 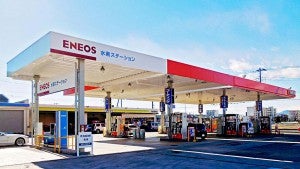 Japan is working with the auto industry to expand the number of hydrogen fueling stations.

Even then, charging times lag. At best, Bolt can get an 80% “refill” in about 30 minutes. The Mirai can fill its tank, and get another 300 miles, in less than five minutes.

There has long been a debate, not only over the various types of green powertrain technologies, but also whether demand will vary by market. Japan and South Korea have shown especially strong interest in hydrogen power, Toyota’s home market gearing up both a wave of new products and a supporting infrastructure, ahead of the 2020 Tokyo Olympics.

Germany has set aside funding for a nationwide network of green energy stations that would provide both chargers and hydrogen pumps.

“Whether to aim for the hydrogen-based society is dependent on each countries and region,” Uchiyamada said. “I don’t think there will be much change in other regions other than the U.S.”