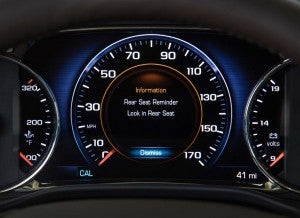 General Motors is expanding the availability of its rear seat reminder technology in the hopes of saving more lives.

The number of infant and toddler deaths as a result of being left unattended in the back seat of a sweltering hot vehicles is on the rise. To help stem that tide, General Motors is expanding its new rear-seat reminder feature to 19 models during the next year.

GM introduced the feature on its 2017 GMC Acadia earlier this year. The news comes just one day after Justin Harris, a Georgia man, received life sentence with no chance of parole after being found responsible for the death of his 22-month-old son, Cooper, who he claims he forgot was in the back seat in June 2014.

Harris left his son in the back of the car for seven hours while he was at work. More than 700 children have died from heatstroke since 1998 after being left in vehicles unattended for extended periods.

“We want to help everyone to take one simple, extra step. That’s why Chevrolet, Buick, GMC and Cadillac will offer the Rear Seat Reminder on a broad range of vehicles, from small cars to full-size SUVs and everything in between.”

To remind drivers that they’ve got a child in the back seat, a chime rings to alert the driver to check the back seat before exiting the vehicle.

The rear-seat reminder activates when either rear door is opened and closed up to 10 minutes before the vehicle is started or while the vehicle is running. After the system is active, it delivers five chimes and shows a message in the driver information center on the dashboard that reads “Rear Seat Reminder / Look in Rear Seat” the next time the vehicle is turned off.

(Look back to eliminate deaths of kids left in cars. For more, Click Here.)

The additional models are:

“This new technology will give busy parents and caregivers the important reminder to always check the back seat,” said Kate Carr, president and CEO of Safe Kids Worldwide, in a statement. “The safest way to protect a child from heatstroke is to never leave a child unattended in a vehicle. Rear seat reminder, coupled with continued public education, can help combat this preventable tragedy.”