Based on 488 Spider, celebrates 50 years in Japan. 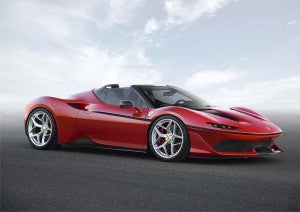 The Japanese market has been a tough one to crack for most foreign automakers. But not Ferrari. It’s had a long and successful history in the Land of the Rising Sun, and it’s ready to celebrate.

The automaker has lifted the kimono to reveal the special, limited-edition J50 convertible it has developed to mark its 50th year in the Japanese market, the mid-engine two-seater starting out as a Ferrari 488 Spider but getting some feature and performance enhancements.

The Ferrari J50 was developed by the Italian maker’s Special Projects unit —with the help of the Ferrari Styling Center — which also came up with the 458 MM Speciale. And if you’re hoping to have something even more unique than the typical Ferrari, this might be your pick considering the plans call for the production of only 10 Ferrari J50s.

The roadster features a carbon-fiber targa top that can be tucked behind the seats, rather than left behind, so you don’t have to worry about being caught out on the road in a sudden storm. 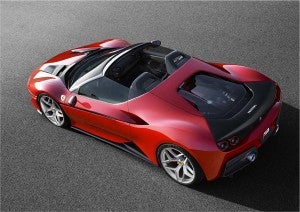 A transparent engine cover and "jet engine afterburner" rear diffuser are among the J50's details.

The Special Projects team set out to make the J50 look even lower and more planted than the stock Ferrari 488, with two carbon-fiber air channels grooved into the hood, the make explains, to “create an even more diminutive and sharper looking front mass underlined by the full LED headlights that feature a specific and very dynamic profile.

Aerodynamics are essential to the overall design, with key changes from the 488 meant to enhance function, rather than just appearance. The Ferrari J50’s radiators have been positioned closer together, while the front bumper has been redesigned.

The windshield header rail, meanwhile, has been lowered to improve airflow over the top of car and the rear spoiler to improve downforce. It creates what Ferrari dubs a “helmet visor effect.” 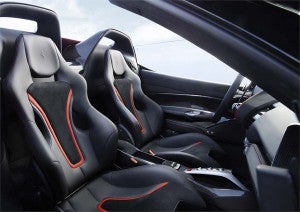 A read and black leather and Alcantara interior.

The redesigned back end, meanwhile, gets a new transparent polycarbonate cover over the engine, as well as quad-taillights. The rear diffuser takes on a sort of “jet engine afterburner” appearance. The back end is reminiscent of the old Ferrari F50.

Inside, the Ferrari J50 features a mix of red and black leather and Alcantara that complements the three-layer-red exterior.

Sadly, it appears you’ll have to find a place to store your Ferrari J50 in Japan if you’ve got the cash and inclination, as that’s the only place the Italian maker plans to sell the 10 copies.