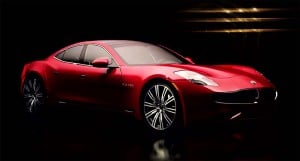 The Karma Revero carries over the design of the original Fisker Karma with but a few tweaks.

The name is new, but the look is likely to trigger a sense of déjà vu. More than four years after its original debut – and three years after Fisker Automotive went belly-up – the Karma plug-in hybrid is making its return.

This time, however, it will go by a new name, the Karma Revero, reflecting the fact that there’s also a new owner, the Chinese start-up that purchased what was left of Fisker out of bankruptcy. Eventually, a version of the Revero is expected to be produced in China but, for now, it will be rolling out of a new plant near Newport Beach, California.

The new owners have polished up a few exterior details, but, “The vehicle, externally, is largely the same” as the original Fisker Karma, noted Jim Taylor, the long-time General Motors executive who last year joined Karma as its chief revenue officer. “The feedback we got on the original design is that Fisker nailed it.”

One exterior revision is the use of a more advanced solar roof. The original car’s system could deliver just enough power to recharge its 12-volt accessory battery. The Karma Revero’s solar roof can add some charge to the driveline’s lithium-ion pack, according to Taylor.

There’ll be more changes inside and under the hood once the new Revero comes to market, perhaps by the end of the year. And still more significant updates are expected. 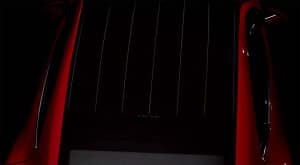 The updated sunroof can deliver a small charge to the powertrain batteries.

As the Revero, there will be a new, more modern infotainment system, for one thing. Another new feature will be the high-speed, direct current Level 3 charging system that will yield an 80% recharge in roughly half an hour.

(Karma one of the automakers hoping to tap into China’s push for battery power. Click Here for more.)

While Karma officials aren’t releasing many details ahead of a launch event planned for Sept. 8, TheDetroitBureau.com was able to pull together some key information.

The plug-in now features an improved 20.4 kilowatt-hour battery. Specific range and fuel-economy numbers have not been determined, but it’s anticipated that the plug-in will get somewhere between 40 to 50 miles in electric mode before either needing to be recharged or switching on its internal combustion “range-extender.”

That four-cylinder gas engine is carried over from the original Fisker Karma and was shared with the Chevrolet Volt plug-in. But expect to see a switch, perhaps next year, or 2018 at the latest, to an all-new gas engine that would be sourced from BMW.

While Taylor wouldn’t confirm that plan, he did note that, “It’s known we’ve formed a relationship with BMW to have access to their parts bin.” The first payoff from that deal is the Karma’s new Level 3 charger. 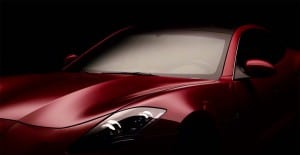 Eventually, Karma is expected to replace the GM IC engine with a new one sourced from BMW.

Specific horsepower, torque and performance numbers are still to be confirmed, Karma in the midst of final testing and prototyping of the Revero.

Like the original plug-in, Revero uses two electric motors, along with the gas engine. The combined package in the Fisker Karma made 400 horsepower and about 980 pound-feet of torque. Fisker claimed that would get you from 0 to 60 in as little as 6.1 seconds using both gas and electric power, or around eight seconds on batteries alone. In Stealth mode the Karma had a rated top speed of 100 mph, a figure jumping to 125 mph when switched to Sport mode.

In its original incarnation, the Karma received generally positive, albeit mixed, reviews. Most observers praised its distinctive design, penned by Henrik Fisker. The Danish stylist is perhaps best known for his work on the Aston Martin DB9.

The drivetrain had some issues, however, and the car was subject to several embarrassing recalls – as well as production problems that eventually contributed to the demise of Fisker Automotive. It plunged into bankruptcy and most assets were eventually sold to China’s Wanxiang Group for about $150 million. 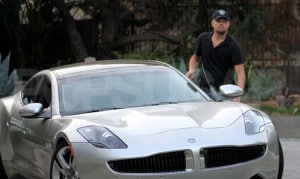 The original Fisker Karma had some high-profile fans, including actor Leonardo DiCaprio.

News reports from Asia this week noted that Wanxiang has applied for a permit from the Chinese government to build the Revero in that country. Taylor could not comment on that report, but the plug-in hybrids that will be sold in the U.S. will all come from the Newport Beach plant, he said.

Insiders say the company is “optimistic” about getting production launched soon, perhaps by the final quarter of this year.

(Click Here to see more about Karma getting powerplants from BMW.)

As for pricing, that won’t be revealed until closer to launch – perhaps at the September briefing, but it will be “going up” from the roughly $100,000 price tag of the original Fisker Karma, Taylor would confirm.

Will there be a market for a Karma revival? Did the plug-in simply suffer too much damage as a result of the well-publicized Fisker bankruptcy?

“There are way more people who don’t know about that than do,” contended Taylor, adding that he is constantly pulled over, while driving a Revero prototype, by folks who praise its design.

Karma will make a push to draw back its original buyers who might be ready to trade in. They already can place preliminary orders, with the rest of the public invited to sign up after the September event.

The new company will put a premium on online ordering, even handling financing on the web. But, in keeping with various state franchise laws, motorists will have to complete the sales process at one of Karma’s new retail outlets. There will be eight initial dealers in the U.S., initially, and two in Canada.

All will be independent franchisees, in contrast to the strategy of rival Tesla Motors which has opted to stick with factory-owned outlets. But Karma also plans to set up a network of company-owned “experience centers.”

Fisker Automotive launched about the same time as the more successful Tesla. But Karma is sticking with its original strategy, betting there’s a market for those who want a green vehicle without the so-called “range anxiety” of an all-battery model.