Partners want to have both fully autonomous and driverless vehicles on the road by 2019. 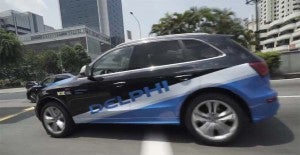 The first of the Delphi autonomous prototypes will be a modified Audi SQ5. Delphi and Mobileye will show off their new system at CES.

In the latest in a burst of announcements aimed at bringing fully autonomous, and even driverless, vehicles to market, automotive mega-supplier Delphi is teaming up with the high-tech Israeli firm Mobileye.

The two tech firms plan to show off their system during a preview at the Consumer Electronics Show in Las Vegas next January, and expect to have it ready for production as early as 2019. The news comes a week after Ford Motor Co. said it would begin building a fully driverless vehicle for use by car-sharing and delivery services in 2021.

“Our partnership with Delphi will accelerate the time to market and enable customers to adopt Level 4/5 automation without the need for huge capital investments, thereby creating a formidable advantage for them,” said Amnon Shashua, chairman and chief technology officer at Mobileye.

The firm, based in Tel Aviv, is already actively involved in the development of advanced driver assistance systems, or ADAS, such as forward collision warning with automatic emergency braking, and it supplies its camera-on-a-chip system to a who’s-who of major auto manufacturers. That included Tesla, until recently, their alliance ended after a fatal May 9 crash involving a Model S battery-car running on the maker’s Autopilot system

Mobileye has also gone a step further, forming more extensive partnerships with General Motors and two other manufacturers that could lead to fully autonomous and even more advanced vehicles.

Mobileye is developing technology capable not only of providing high-resolution, 3D road maps but also of using crowdsourcing to continuously update that data – to show such things as construction, detours and even new potholes.

Delphi, meanwhile, has been actively involved in testing various autonomous car technologies for a number of years. It demonstrated its capabilities in 2014 with a modified Audi driven across the U.S. in hands-free mode. And early this month it announced a deal with the Singapore Land Transit Authority to put a small number of autonomous vehicle prototypes in use along a series of routes in the densely packed city-state.

(Click Here for more on the Delphi Singapore project.)

“This partnership will allow us to give our customers an increased level of automated capabilities faster and more cost effective,” said Kevin Clark, Delphi’s CEO. “The collective expertise of our two organizations will accelerate the creation of new approaches and capabilities that would likely not have been possible working alone.”

Automakers have been phasing in autonomous vehicle technology, starting with driver-assistance systems, such as Tesla’s Autopilot and the Super Cruise system General Motors plans to launch next year. They are meant to assist in the driving process – automatically braking in an emergency, for example – but not take over entirely.

The real focus is on what are known in the tech world as Level 4 and Level 5 systems. The former would allow full autonomous driving, although an “operator” would need to remain behind the wheel, ready to take over in an emergency. Level 5 technology wouldn’t need a driver up front and the vehicle might not even have conventional controls such as a steering wheel or pedals.

Nissan has promised to put as many as 10 fully autonomous vehicles into production by 2020. And other makers have laid out similar targets.

Until recently, however, it was generally assumed that fully driverless models wouldn’t be ready for real-world use until later in the coming decade, perhaps not until 2030 and beyond. But Ford last week said it was skipping past ADAS and Level 4 systems and going straight for driverless vehicles.

Raj Nair, the Detroit automaker’s chief technology officer, argued that keeping a driver at the ready in case an autonomous system fails is not a reliable solution. The longer the operator sits behind the wheel, “You lose driver awareness, lose driver situational response. You lose the ability for a human to respond in a timely manner.”

While fully autonomous technologies are expected to have broad application, industry analysts believe fully driverless vehicles will particularly appeal to car-sharing and delivery services. Uber, for example, has set up its own R&D center in Pittsburgh and officials have said they believe that by eliminating the driver from the equation the cost of using the service would drop to below what it now costs to own and operate a personal vehicle.

Google, meanwhile, has also said it is focusing on driverless systems and recently patented a concept for a Level 5 delivery truck.

The National Highway Traffic Safety Administration has endorsed the concept of autonomous and driverless vehicles and plans to issue the first federal guidelines for implementing the technology before the end of the year. Long-term, NHTSA chief Mark Rosekind has said he believes autonomous vehicles could all but eliminate U.S. highway deaths.

But the agency has also warned automakers that they cannot rush the technology to market too readily, ignoring short-term safety concerns. NHTSA has launched an investigation into the May 9th crash that killed former Navy SEAL Joshua Brown, as has the National Transportation Safety Board.

Skeptics, meanwhile, have called on NHTSA to slow the pace of the autonomous vehicle gold rush in order to ensure manufacturers can solve the many challenges that remain before they put these high-tech vehicles on the road.