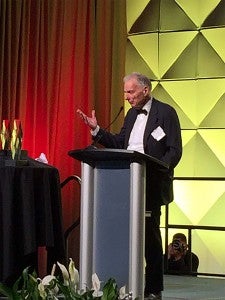 Ralph Nader turned safety into a serious issue for the auto industry.

The man once accused of trying to destroy Detroit now has a permanent home in the Motor City.

Ralph Nader, the consumer advocate credited with changing the way the auto industry operates with his critical book, “Unsafe at Any Speed,” was one of four industry legends inducted into the Automotive Hall of Fame on Thursday night, joining retired Ford CEO Alan Mulally, automotive engineer Roy Lunn and Bertha Benz, the wife and financier of pioneer Karl Benz.

“There are thousands of people who would be dead if it weren’t for Ralph Nader,” said publisher Keith Crain as he introduced the 82-year-old Nader to an audience of industry managers and executives gathered for the black tie affair.

Coming onto the stage, the one-time independent presidential candidate made it clear that age has not mellowed him. Nader’s speech raised serious concerns about a new era of automobiles that have become “supercomputers on wheels.”

Trained as a lawyer, a graduate of Princeton and Harvard, the son of Lebanese immigrants also filled in some of the blanks, explaining why he became such a strong advocate for automotive safety. “I lost a lot of friends in high school” to car crashes, Nader said, adding that while in college he frequently hitchhiked around the country and often saw the “mayhem” caused by crashes that could have been prevented by safer vehicle designs. 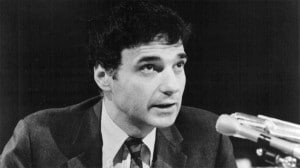 Ralph Nader testifies before Congress in 1966. It was 50 years ago that his groundbreaking book, "Unsafe at Any Speed," was published.

He began writing about automotive safety while still in school, but it was the 1965 publication of “Unsafe at Any Speed” that brought him to the attention of the public – and to General Motors. While a broad treatise on vehicle safety, it focused on the then wildly popular Chevrolet Corvair’s frequent involvement in one-car accidents.

(50 years later, are cars still “Unsafe at Any Speed”? Click Here for more.)

GM’s response was to hire private detectives who followed Nader, tapped his phone and even hired prostitutes to entrap him in unflattering situations. Nader sued and eventually won a settlement he used to set up the non-profit Center for the Study of Responsive Law. But the scandal had a bigger impact.

“Some of the arguments against greater safety bordered on hilarious tragedy,” Nader said in his speech, telling the Automotive Hall of Fame audience how he would frequently fly into Detroit and meet industry engineers in cabs that would circle the airport while they would reveal problems that they couldn’t get fixed. 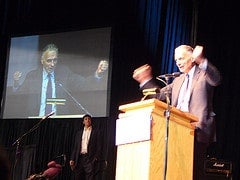 Nader won nearly 3 million votes during a 2000 independent run for the White House.

“Unleash the engineers and you won’t believe what can happen,” Nader declared in his speech, or “how fast it can happen.”

He pointedly stressed that since the passing of those original safety standards the highway fatality rate in the U.S. has fallen five-fold, saving an estimated 3 million American lives.

Explaining his early years, when many questioned why an Ivy League-trained lawyer would focus on auto safety, Nader recalled when Time magazine put him on its cover. The reporter called his mother and repeatedly asked her what makes Ralph tick. “What makes you not tick?” she said to him.

Nader took several runs at politics, most famously in 2000, as an independent candidate for president. He ultimately received about 2.9 million votes, or 2.74% of those cast nationwide. Some critics say that cost Al Gore the White House, tipping Florida in favor of Republican George Bush. It is a claim many, including Nader, deny.

(Automakers, regulators pair up in “historic” shift on safety. Click Here for the story.) 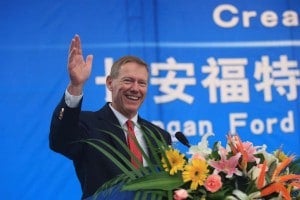 Ford CEO Alan Mulally during a visit to China.