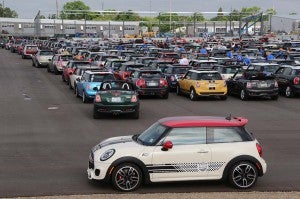 A thousand people, and several dogs, are taking part in the biennial Mini Takes the States cross-country road trip, which ends in Palm Springs.

“We plan to keep the car until the rims fall off, and then we’ll probably just replace the rims,” laughs Kevin Evans, as he and wife Nancy took a break at Detroit’s Eastern Market.

They’ve already clocked a fair bit of mileage on the 2006 Mini Convertible, and they had more coming during the next few days.

The Missouri couple were among the thousands of people who were expected to join in and at various stages of the biennial Mini Takes the States drive, a mobile, two-week festival that began in Atlanta, Georgia, on July 9 and will wrap up after a meandering, 4,500-mile trek, in Palm Springs during the weekend.

While some participants have joined in for short legs – the MTTS route stopping in places like Charlotte, Baltimore, Sturgis, South Dakota, and Cheyenne, Wyoming – at least 1,000 people were expected to complete the more or less coast-to-coast journey.

Make that 1,000 people and at least a few dogs. In fact, Debbie Hemela found so many people wanted to meet her Rhodesian Ridgeback during the previous Mini trek in 2014 she decided that Ruby would have her own blog this time around, at RubyRoadTrip.wordpress.

Nancy, left, and Kevin Evans plan to drive their Mini "until the rims fall off, and then we'll probably get new rims."

(Mini fast-forwards to the future with Vision Next 100 concept. For more, Click Here.)

“I bought my Mini in 2014 just for the trip,” explained Hemela, a Californian who had recently been widowed and wanted to check off at least one item on her bucket list.

“I’d been talking about doing a road trip for a long time. I just didn’t think it would go for 12,000 miles,” she said with a laugh, recalling the added miles she put on after the 2014 Mini Takes the State ended.

As this window sticker shows, Mini owners clearly have a sense of humor.

This trip, Hemela said she encouraged friends to come along in their own Minis. And that’s a story repeated by a number of other participants in the rally. Wandering through the crowd as it makes a mid-trip stop in Michigan’s Upper Peninsula, there are endless tales about making friends along the way, with many participants saying they’re back for another MTTS just to see acquaintances from other parts of the country.

Making friends is part of the thrill for Robert Womble, the 13-year-old son of Memphis resident Cynthia Womble. They drove their own Mini, nicknamed “Black Pete,” to Atlanta and were planning to make the full run.

Debbie Hemela and her dog, Ruby, are doing their second tour on the MTTS. Ruby even blogs about the experience!

“We’ve been wanting to do it for a long time, and we just got around to it,” he explained, adding that, as of mid-rally, “It’s a lot funner than staying home over the summer. We get to do see something different every drive and meet a lot of people.”

His mother is just glad to have a chance to bond with her son before he gets to that age he won’t want to be seen with her, she laughed, adding that they’re in it to go “all the way,” and expect to clock well over 6,000 miles before returning home.

“It’s a religion for some of these folks,” said Pat McKenna, Mini’s U.S. product chief. “Their Mini is like a family member.”

Having 1,000 or more of the same cars parked in close proximity might normal create headaches for someone trying to find their own vehicle. But Mini owners are an individualistic lot and surveying the vehicles parked at the ice hockey arena in St. Ignace, Michigan reveals a seemingly endless array of colors – from matte black to neon pink – and other custom touches.

There are the British Union Jack roof decals, plenty of unique license plates, bumper stickers like one declaring, “I shot the clown and stole his car,” and some even wilder modifications.

Robert Womble, 13, is making the trek with his mom, Cynthia, before he's too cool to be seen with her.

You never see two of the same cars,” says McKenna.

That feedback helped Mini when it redesigned the classic hatchback a year back, and it will influence future models in a variety of ways, down to the colors the brand offers. McKenna has been fielding a lot of requests this trip to bring back the Ice Blue shade the brand dropped a few years back.

The MTTS was heading to northern Michigan on its way across the states.

The rally has another purpose, helping rekindle the love of a decidedly eccentric brand. Mini sales peaked in 2012 and have been sliding since then, though that’s true of just about all small cars as a result of tumbling fuel prices. But Mini has found that it can keep owners in the family by engaging them in events like the Takes the States rally.

(Mini goes ALL4 with the new Clubman. Click Here to check it out.)

The last few stragglers are expected to wander into Palm Springs by the 23rd of July, but how soon they’ll head home is anyone’s guess. With new friends found along the way, many say they’ll take their time and keep on driving.