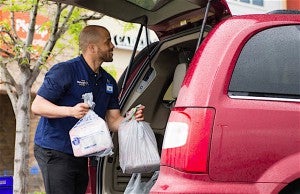 Walmart is testing a new deliver program that allows users to shop for groceries over the internet and be delivered by Uber, Lyft or Deliv.

Companies have been “threatening” to do it for years, but it appears that retail behemoth Walmart may have found the magic mixture to make it happen: online grocery shopping.

The Arkansas-based retailer is teaming with Uber and Lyft to allow those who find the appeal of walking up and down the aisles of their nearby location too much to handle pick, bag and deliver groceries. The company is offering through its Walmart and Sam’s Club locations.

Walmart will start with tests of grocery delivery through Uber in Phoenix and Lyft in Denver, which we expect to start within the next two weeks. This is in addition to a very quiet Sam’s Club pilot that started in March with Deliv involving delivery of general merchandise and grocery for business members in Miami.

“We’re thrilled about the possibility of delivering new convenient options to our customers, and about working with some transformative companies in this test,” said Michael Bender, EVP and Chief Operating Officer, Walmart Global eCommerce, in a release.

“We’ll start small and let our customers guide us, but testing new things like last-mile delivery allows us to better evaluate the various ways we can best serve our customers how, when and where they need us.”

(Shoppers could be in for bargains as makers ramp up incentives after slow May. For more, Click Here.)

The system is fairly simply. A customer places their grocery order online and selects a delivery window. Walmart has specially trained associates to pull the items from the shelves and bag them. They put the order into an Uber or Lyft vehicle and it is delivered to the customer. 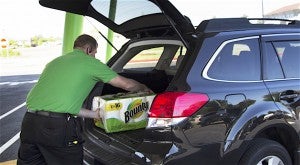 The new service is being tested in a few markets, but it also reveals the impact that mobility services could have in the future.

“It’s all seamless to the customer,” he said. “They pay us our normal $7-10 delivery charge online, and make no payment to the driver. We’ll also let them know their order is being delivered by a driver from Uber or Lyft.”

“We believe Walmart’s new delivery service with Uber and Lyft will be beneficial to inner-city workers who do not own cars and for whom grocery trips are often limited to what they can carry home,” said Zacks Equity Research in a report.

(Click Here for details about how subprime auto loans may impact banks.)

Online grocery shopping and delivery is a booming industry worth $10.9 billion in the U.S., and Wal-Mart is aggressively trying to get a share of the pie. That pie could, someday, include autonomous vehicles making those deliveries: vehicles produced through tie-ups between General Motors and Lyft as well as other automakers.

Uber and Lyft have begun their autonomous testing. Uber is setting up its new tech center in Pittsburgh, it likely also will benefit from the autonomous vehicle programs set up by automakers and auto suppliers, as well as software giant Google – the latter firm announcing this past month a pilot program to install its self-driving technology in 100 Chrysler Pacifica minivans.