New technology could cut down rising number of pedestrian-bus crashes. 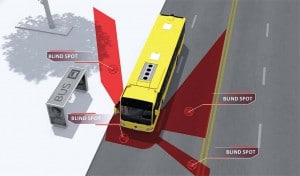 The Mobileye Shield Plus helps eliminate the blind spots on city buses, which can lead to accidents.

More than 2,000 new buses will be rolling out across New York City in the months ahead. Designed to be more reliable and fuel-efficient, they’ll also offer a number of new amenities for passengers, including free WiFi.

But they won’t come with some of the safety features increasingly common on today’s passenger cars, such as blind-spot detection. That’s a big problem, safety advocates warn, considering bus crashes are one of the reasons why the U.S. saw a roughly 15% increase in pedestrian fatalities last year.

The good news is that the city’s mass transit authority, the MTA, will soon begin testing several new technologies that could reduce all sorts of bus crashes, including impacts with pedestrians who often cannot be seen by drivers as they turn corners because of the vehicles’ large blind spots.

One of the systems was developed by an Israeli tech company, Mobileye, which is already producing an assortment of collision prevention systems – and which is also working with several major automakers to develop next-generation, 3D maps that will improve the accuracy and safety of tomorrow’s autonomous vehicles.

Future NYC buses could feature the same safety technologies used by cars and trucks, such as collision avoidance and emergency braking.

The bus system is known as the Mobileye Shield Plus, and it uses a set of cameras strategically mounted on the outside of the vehicle to see what the driver might miss. If a bicyclist or pedestrian is spotted in a danger zone an alert is sounded and a warning lights up on one of three different displays on the bus’s instrument panel. That helps the driver figure out where the pedestrian might be then either stop or steer to safety.

The Shield Plus system has a second purpose, according to Lior Sethon, a senior executive with Mobileye. “You’re collecting data on not just real collisions, but near collisions,” he explains, adding that this information can be used to isolate so-called “hotspots” along city bus routes.

One benefit will be using that data to train drivers, advising them, for example, about locations where they need to slow down. The city may also use that information to make infrastructural changes. During a meeting at Mobileye’s headquarters in Tel Aviv, Sethon showed video collected by buses along one of those New York City hot spots, a route near the Brooklyn Bridge. A poorly marked intersection makes it easy for buses and other vehicles to miss pedestrians crossing the street. 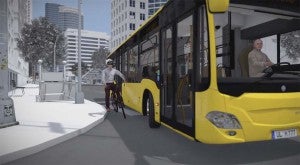 Bus crashes are one of the reasons why the U.S. saw a roughly 15% increase in pedestrian fatalities last year.

(Click Here for details about the volume of car loans rising to record Q1 levels.)

The pilot program for the two new safety systems will be expanded to 300 of the buses this year. According to MTA authorities, it will cost about $20 million to install the pedestrian system on the entire fleet. Mobileye says the technology costs between $5,000 and $6,000 per vehicle installed. A separate anti-collision system would run another $57 million fleet-wide.

“Testing these systems is part of our ongoing commitment to improving the safety of our customers, pedestrians, and bicyclists,” said MTA spokesman Kevin Ortiz. “These tests will take this commercially-available technology and hopefully show that we can put it to practical use on a larger scale under New York City operating conditions.” 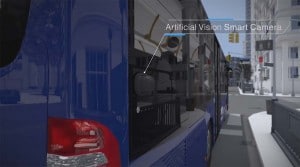 Mobileye plans to give 300 of the units to the city that wins the Smart Cities Initiative program sponsored by the U.S. Department of Transportation.

New York is just one of the cities adopting pedestrian warning systems, like the Mobileye Shield Plus. Boston has adopted a new “Vision Zero” program to improve bus safety. And the Israeli company plans to give 300 of the units to the city that wins the Smart Cities Initiative program sponsored by the U.S. Department of Transportation. Other cities around the world, including London, are also adopting the Shield Plus system.

(Strong holiday weekend needed to eclipse sales from last May. Click Here for the story.)

According to Sethon, more than 1,000 of the units are now in operation and, after a year since the technology was introduced, there have been no pedestrian collisions.