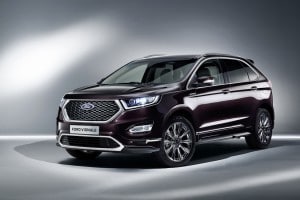 The new Ford Edge Vignale is part of the expansion of the maker's luxury efforts in Europe.

Ford is banking on the possibility that European drivers like well-equipped, luxury-level crossovers too as it expands its Vignale from one vehicle to five models in the months ahead.

The first entries in the luxury crossover line-up were introduced at the Geneva Motor Show: the new Ford Edge Vignale – the company’s first entry into the upscale SUV market in Europe – and the new Ford S-MAX Vignale.

The automaker revealed earlier that it would move in this direction as it looked for ways to differentiate itself from the competition in Europe and remain profitable in the years ahead. In addition, revealed for the first time was the Ford Mondeo Vignale five-door model that will go on sale in 2017, and a concept version of a forthcoming Ford Kuga Vignale.

“Our customers have high aspirations, and they want more from Ford. On some vehicles, our top-of-the-line Titanium specifications make up 70% of all sales,” said Jim Farley, chairman and CEO of Ford of Europe.

“With Ford Vignale, we can offer them the absolute best of Ford in terms of luxury and personal service. That’s why we are expanding from Ford Mondeo Vignale to our flagship products Edge and S-MAX, with Kuga to come soon after.” 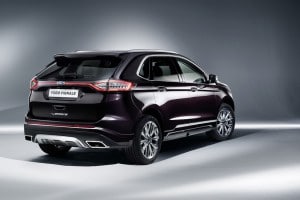 The new Edge Vignale is expected to hit showrooms in Europe later this year.

Ford also debuted new design options that from next year will enable customers to further personalize the exterior styling of the Ford Mondeo Vignale and Ford S‑MAX Vignale. No pricing details were released on the new Edge model, but S-MAX can be ordered now, officials said.

The Vignale luxury sub-brand is basically Europe’s version of Lincoln, but it’s something the continent’s Ford customers are unfamiliar with from the automaker. Ford is going all out with this luxury effort, including offering Vignale owners services and experiences they can’t get elsewhere such as exclusive offers for theatre, music and sporting events including French Open tennis.

Ford will keep customers informed about the latest exclusive travel and lifestyle opportunities via a monthly email update, launching across Europe this month.

Additional customer benefits offered by Ford Vignale include the Vignale Service smartphone app for Apple and Android operating systems. The app delivers a direct link to online lifestyle content from the Vignale Magazine, in addition to offering driving tips and information; a dealership locator; and GPS-enabled services including Ford Vignale Park Me, fuel stations locator, and a one-touch connection with emergency services or Ford Vignale One Call.

The brand also has ambassadors aimed at helping the automaker raise its profile: Joe and Charlie Casely-Hayford, father and son fashion designers at the forefront of menswear with the Casely-Hayford’s brand, and Kai Petermann, a Berlin-based founder and creative director of “stilsucht.de”, a leading German interior design online destination. 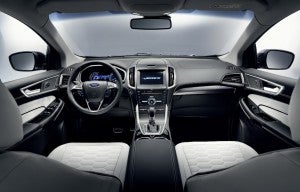 Ford's European customers are ordering vehicles outfitted with its high-end Titanium package, giving rise to expansion of its Vignale offerings.

The Casely-Hayfords are the first actively co-working father-and-son team to make a breakthrough in high fashion and between them have styled for the musicians including Lou Reed, Nas, Sam Smith, The Clash, The xx and U2. Petermann is one of Germany’s biggest digital influencers, and his blog focuses on design discoveries, lifestyle ideas and technologies.

“We chose to work with Ford Vignale because we felt there was a strong brand synergy,” Joe Casely-Hayford said. “We liked the idea of combining craftsmanship with innovation, and technology with tradition. We love the attention to detail.”

Ultimately, the expanded Ford Vignale model range will be available to order at FordStores across Europe, and at customers’ Ford retailer of choice, the company said. The company is looking to give Vignale buyers a more upscale experience with lounges offering a “personalized” environment, including a dedicated Vignale Relationship Manager.

Ford already has established 300 FordStores and expects to complete its roll-out of 500 early next year. The move is part of a larger push that see the introduction of seven new vehicles in the near term, including five new SUVs and crossovers in the next three years. Ford expects to sell more than 200,000 SUVs in 2016: a 30% jump compared with 2015.

Performance versions of the Focus and Fiesta, along with the Mustang, are part of the maker’s effort to keep in the black. Ford officials said it would sell more than 40,000 performance cars this year.

(To see more about Kia crossing the Atlantic with its new Niro hybrid, Click Here.)

Like most other automakers on the continent, Ford plans to expand its electric vehicle and hybrid offerings by 2020. Right now, it has the Focus EV as well as the Mondeo and CMax hybrids in Europe. Finally, the automaker will also cut less profitable vehicles, but officials declined to name what models are on the chopping block.