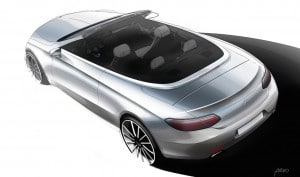 Mercedes-Benz teased its anticipated C-Class cabriolet, which will debut in Geneva, will hit showrooms this fall.

With March comes thoughts of warmer spring days and nice drives with the roof down and Mercedes-Benz will be playing on those desires with its new C-Class Cabriolet.

The new four-seater droptop is set to debut at the Geneva Motor Show next month. In fact, the German maker’s looking to make a splash with a series of convertibles at the Swiss show.

The already shown SL and SLC roadsters that made their premier in Los Angeles and Detroit auto shows will be there as well as the Mercedes-AMG S65 Cabriolet. The SLC is taking the place of the SLK and gets a significant facelift for 2017.

Aside from the artist’s rendering details are tough to come by; however, it’s likely to roll out as a C300 featuring a 2.0-liter turbo charged four cylinder putting out 241 horsepower. Performance mongers are almost certain to get a version that makes them happy as well.

The SL500 is powered by the 2.0-liter four cylinder mentioned above. In the two-seater it pushes the roadster to a top speed of 155 mph.

The SLC also got the AMG treatment with availability as the SLC43 with the same 3.0-liter V6 that’s been predicted for the new C-Class cabriolet.

(To see more about the major changes for the new SLC roadster, Click Here.)

The unmodified version of the 2017 convertible is likely to hit dealerships this fall, according to the automaker.