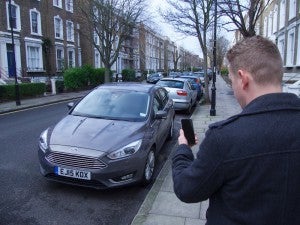 Ford debuted the new Kuga at the Mobile World Congress in Barcelona, rather than at the Geneva Motor Show.

With the auto show circuit underway, most would expect Ford’s latest new model introduction to come at the Geneva Motor Show in March. Not so, as the new Ford Kuga SUV debuted at the Mobile World Congress today.

The new European SUV along with an announcement that the automaker’s latest Sync iteration, Sync 3, is coming to Europe later this year, at the show in Barcelona, Spain, is just one more example of the importance makers place on technology shows to capture the attention of buyers.

Ford CEO Mark Fields not only rolled out the new car, he also said the company would triple the amount it invests in new technologies that not only make for safer, more entertaining vehicles, but ultimately will lead to the production of self-driving cars.

By making this announcement at the tech show, Fields – and other makers who have made similar efforts – are looking to grow their audience.

“We are really emphasizing our transition from an auto company to an auto and mobility company,” Fields told Associated Press. “This is a really good audience to reach some new folks.”

Ford, in particular, has been taking its newest announcements to the tech crowd rather than the auto crowd. Both Fields and his predecessor, Alan Mulally, have given the keynote address at the Consumer Electronics Show in Las Vegas.

The automaker made several important announcements at this year’s CES, including partnering with AT&T on Ford Sync Connect, accelerating sensor testing and tripling the size of its autonomous vehicle development fleet and expanding its capability of integrating its ability to link with other smart technologies to make life easier.

The company also announced its plans to work with startups to develop “future mobility solutions.” Fields and other Ford officials reiterated the company’s commitment at the technology congress today.

“We like to think about it as the transition from just a hardware company to a software and mobility services company as well,” Don Butler, Ford’s executive director of connected vehicle and services, told AP.

Many of automakers are focused on mobility and throw the term around pretty liberally these days. While it may mean different things to different companies, the central focus among them all is a move toward autonomous vehicles. The differentiator is how do those vehicles interact with their owners as well as the non-autonomous world around the vehicle.

For the moment, Fields said, the automaker is keenly aware that it must walk a fine line. While a fully autonomous vehicle is the end goal, it’s something to be achieved in steps. If for no other reason that not all drivers are certain they want to give up control of their vehicles entirely.

He noted that Ford is taking a “dual path” in its development plans. One part of that is producing technology that assists the driver, such as lane assist, emergency braking and others. The other is a connected car with a driver that is almost half passenger, half driver.

The driver must be ready to take over at a moment’s notice in the event of a problem, but that would be a rarity in an ideal world. However, other concept Ford must be aware of is ride-sharing, whether that means sharing cars with multiple drivers or simply using services like Uber or Lyft.

“Across the world when you see growth of these megacities, with 10 million or more folks, people want mobility solutions, they want options,” Fields said, including the aforementioned shared scenarios. Those projects include car-sharing in London and across Germany. Ford is also working on an experimental e-bikes program that Butler said it could one day mesh with car-sharing.