New design language debuts; new powertrain option may be in the works. 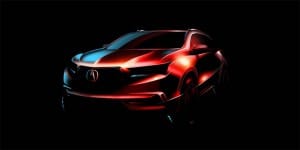 After giving us a tease of its new styling direction with the Precision Concept at the Detroit Auto Show last month, Acura is about to show us what that actually will translate into. The first new model to pick up on the new design language will be the 2017 Acura MDX making its debut at the New York International Auto Show next month.

The MDX isn’t due for a complete makeover until around 2020, but the ute scheduled for a Big Apple unveiling appears to be more than the typical, mid-cycle makeover, picking up a number of design details first seen on the Acura show car.

“We are sharpening our focus on the Precision Crafted Performance DNA of the Acura brand and the 2017 MDX will integrate new styling elements and powertrain technology that takes us another step in that direction,” said John Mendel, executive vice president of American Honda Motor Co., Inc.

(Click Here to check out the new Acura Precision Concept.)

One of the most notable changes can be seen up front where the controversial “beak” grille has been banished in favor of a more dramatic, ovoid shape surrounded by what, in this rendering, appears to be a chrome frame. The 2017 Acura MDX boasts more slit-like, recessed headlamps – likely using LED technology. 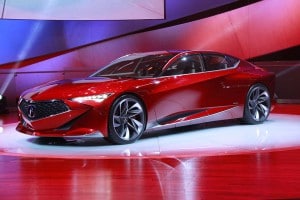 The hood and body panels adopt a more sculptured appearance, with broad and curvaceous wheel wells, rather than the older model’s relatively flat sheet metal.

While the maker is holding details close to the vest, waiting for its news conference in New York, it does appear the new Acura MDX will see some updating of its powertrain options, as well. The engine package is a 3.5-liter V-6 making 290 horsepower and 267 pound-feet of torque. It can be ordered with Acura SH-AWD, or super-handling all-wheel-drive system which includes torque vectoring capabilities, the ability to shift torque to the outer wheels to enhance cornering.

It’s possible we’ll see a more advanced version of SH-AWD on the 2017 Acura MDX, influenced by the high-tech version that just debuted on the new Acura NSX supercar. That configuration includes three separate electric motors – two driving the front wheels, a third in the rear — as well as a turbocharged V-6. A slightly less sophisticated hybrid drive could be in the plans for the MDX, several sources have hinted. 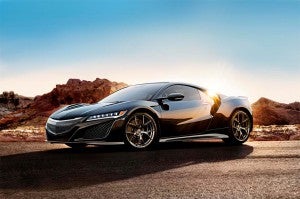 The 2017 Acura MDX could adopt a version of the more advanced SH-AWD system developed for the reborn NSX supercar.

At the least, we’ll expect to see an improvement in mileage from the current model, the front-driver delivering 20 City, 28 Highway and 23 Combined, the SH-AWD version rated by the EPA at 18/27/21.

Set to roll into showrooms sometime around mid-year, the 2017 Acura MDX will be entering a fast-growing luxury SUV market, but one getting flooded with new competitors, such as the Cadillac XT5. While automakers have been nudging up prices on their utes, especially well-equipped luxury models, the base 2017 Acura MDX is likely to see only the most modest increase from the current model. But there is likely to be a lot more option content that could drive a top-line version up by a fair bit.

We’ll have more to report from New York in a little over a month.