Ford Syncing Up with Amazon’s Alexa

Automakers turning vehicles into hubs to control Internet of Things, 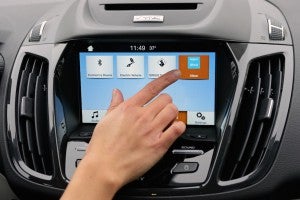 Ford is partnering with Amazon's Alexa to give drivers access to control items in the Internet of Things.

You’re heading home on a cold winter’s eve, looking forward to warming up and relaxing after a busy day at the office.

As you pull off your exit on the freeway, you tap the voice command button on the steering wheel and say hello to your virtual valet, Alexa, telling her to turn on the lights and raise the thermostat at the house. But before you sign off, she also reminds you that there’s no beer in the refrigerator.

According to a new study by the high-tech research firm Gartner, a typical American home may contain as many as 500 smart devices by 2022.

“We expect that a very wide range of domestic equipment will become ‘smart’ in the sense of gaining some level of sensing and intelligence combined with the ability to communicate, usually wirelessly,” said analyst Nick Jones.

And a number of automakers want to turn your automobile into the hub that can be used to control this so-called Internet of Things, or IoT.

The Dearborn, Michigan-based automaker recently announced a partnership with Amazon that could help make this concept a reality. Amazon now markets a device called the Echo, a 10-inch tall, black cylinder that combines a wireless Bluetooth speaker with a virtual valet named Alexa. Simply speaking her name brings Alexa to life, allowing a user to ask for the weather, set an alarm – or control a number of IoT devices, such as home lighting.

Ford is by no means the only automaker looking to expand the range of connected features available inside its cars.

At this month’s Consumer Electronics Show in Las Vegas, Volkswagen showed off a concept minivan, the BUDD-e. At first glance, it looked a lot like the old VW Microbus of the 1960s. But BUDD-e is no retro-mobile. It is loaded with advanced electronic systems that allow many of its features to be operated with a gesture or voice command. There’s a living room-sized video screen, a reconfigurable instrument panel – and a link to the Internet of Things.

“This is what Volkswagen cars will look like in the future,” said VW brand CEO Herbert Diess, noting that BUDD-e would even let you “keep an eye on my fridge.”

(Click Here for more about the Obama Administration’s $4 billion plan for connected cars.)

Out of beer? No problem. It would send you an alert to stop for some on the way home.

And automakers are looking to find ways to increase the bandwidth accessible inside their cars. At the North American International Auto Show last week, Toyota announced a partnership with a Washington state start-up named Kymeta that is developing a super-fast satellite antenna. The system would allow a motorist to stay connected even where there’s no cellphone access and it would deliver far faster service than even next-generation 5G cell systems.

(To see more about how automakers turned this year’s CES into a high-tech car show, Click Here.)

“The future of a connected car and home is now becoming a reality,” said Sascha Keller, CEO of Door Bird systems, a start-up provider of IoT devices. “It will be an everyday part of your life.”