Ford and Google Deal to Go Beyond Autonomous Vehicles

Ford is just beginning its own on-road autonomous vehicle testing at its Silicon Valley R&D center.

While last-minute snags could yet delay a formal announcement, Ford Motor Co. and Google are planning to reveal the details of an extensive new partnership during a news conference at the Consumer Electronics Show in Las Vegas this week.

The expansive alliance will provide Ford access to Google’s cutting-edge autonomous vehicle technology, but several sources involved in the program told TheDetroitBureau.com that the deal will go well beyond self-driving cars and explore ways in which connected car technology can create alternative mobility solutions, a pet project of Ford CEO Mark Fields.

Other high-tech providers will join the alliance and, among other things, Ford will be able to test its new technologies at a 1,000-acre proving grounds being set up in North Carolina, according to those sources.

Self-driving vehicles have become one of the hottest topics in the auto industry, and the first semi-autonomous vehicles are just now getting out on the road. Tesla Motors recently introduced its AutoPilot system which allows hand-free operation on limited-access highways. General Motors’ Cadillac brand and Nissan, among others, are planning to roll out similar features, with that Japanese marque promising to have its first fully autonomous car in production by 2020.

A study released last month by Britain’s Juniper Research listed Google as having the most advanced self-driving technology. But the Silicon Valley tech giant has said it doesn’t plan to produce cars of its own, opting instead to find other automakers willing to license what it has developed. 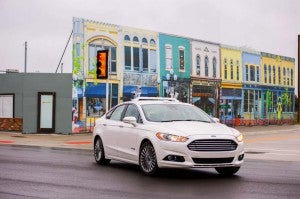 The tie-up with Ford – a non-exclusive deal, insiders say – would be the first such alliance. And it would be a major plus for the Detroit maker. Company sources say former Ford Chief Executive Officer Alan Mulally initially was reluctant to embrace autonomous vehicle development. Under his successor, CEO Fields, the carmaker has had to play a game of catch-up.

Ford has begun testing its own technology using a small fleet of Fusion sedans. It recently became the first carmaker to venture out on the 80-acre MCity testing facility set up by the University of Michigan, in Ann Arbor. And it plans to start testing an autonomous Fusion prototype from its new Silicon Valley test center this month.

But the North Carolina proving grounds would be more than 10 times bigger than MCity while also allowing for Ford to take more risks than it could comfortably and safely handle on public roads in California.

Sources close to the project stress that Ford is not planning to build “Google Cars.” The tech firm recently began rolling out 100 bubble-shaped vehicles that is testing on its own on roads outside its Silicon Valley and Austin, Texas tech centers. Ford will use modified Fusion sedans at the North Carolina proving grounds.

Meanwhile, though autonomous technology will be an essential part of the alliance, it will encompass an array of additional connected car technologies. Among other things, that will include vehicle-to-vehicle and vehicle-to-infrastructure communications. Federal safety regulators want to set up a nationwide network that could provide advisories on weather or traffic, for example.

Google has been looking for partners interested in using its autonomous technology.

But it will also explore other ways to connect with motorists to, say, expand the reach of Google’s powerful mobile marketing system. Google is the largest provider of Internet advertising and some see huge, untapped opportunities to, for one thing, offer a motorist a coupon for a cup of coffee as they approach a McDonald’s or Starbucks.

The communications technologies could also assist in a variety of mobility projects Ford is currently working on. At a background briefing for reporters last month, Ford CEO Fields said his goal was to have “one foot in the future,” recognizing that as cities around the world grow larger and roadways more crowded, many consumers will seek alternatives to vehicle ownership.

When asked to comment on the Google partnership, a Ford spokesman e-mailed a statement noting, “We have been and will continue working with many companies and discussing a variety of subjects related to our Ford Smart Mobility plan. We keep these discussions private for obvious competitive reasons, and we do not comment on speculation.”

But Fields is expected to offer at least some public insight during a keynote address at the 2016 CES opening session this week. He is a vocal proponent of alternative mobility technologies, from autonomous vehicles to ride-sharing, and has ramped up Ford’s efforts since taking over as CEO in mid-2014.

While insiders say Mulally was initially skeptical, he has become an active proponent of self-driving vehicle technology, a shift that apparently began even before he signed on as a board member with Google immediately after retiring from Ford.

Meanwhile, there’s another link between the two companies. John Krafcik, the recently hired head of Google’s autonomous vehicle program, started out as a Ford engineer. He went on to head Hyundai Motor America and then became a senior executive with TrueCar before moving to Silicon Valley last year.

Various sources stress that there are still some hurdles to overcome before all the pieces can come together. “The legalities are extensive,” said one, noting that Ford and Google have been exploring opportunities for several years.

At one point a couple years ago, the tech firm’s founders, Sergey Brin and Larry Page, visited Ford headquarters, but what appeared to be an earlier deal never came together. Now, however, both Google and Ford appear to have found common ground that could put them at the forefront of some of dramatic changes promising to reshape the global auto industry.