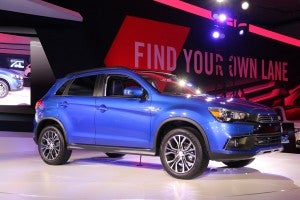 The new 2016 Mitsubishi Outlander Sport made its debut at the Los Angeles Auto Show.

Once viewed as hanging on in the U.S. market by a thread, Mitsubishi debuted two new models that are instrumental to its continued comeback from the brink: the 2016 Outlander Sport and 2017 Mirage at the Los Angeles Auto Show.

“North America is a vital market to Mitsubishi Motors, as evidenced by the two world introductions we made today at the LA Auto Show,” said Don Swearingen, executive vice president, MMNA. “Outlander Sport leads the brand in overall sales, and the improvements debuted today will further its demand.

“The Mirage is a vehicle that has already gained popularity with its affordable and practical appeal, and that will certainly carry over into the 2017 model year with its improved looks and performance.”

Mitsubishi’s return to prominence has centered on providing buyers with vehicles loaded with equipment for low prices and common design elements aimed at making its products unified in look, but differentiated from the competition. 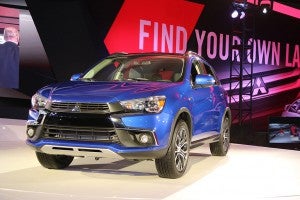 The new models introduced in Los Angeles continue that trend – a pattern that has resulted into 20 consecutive months of increasing sales through October.

“We expect this momentum to carry on as we debut vehicles that are better looking and packed with more value than ever before,” said Swearingen. “We will continue to offer consumers reliable vehicles at value oriented price points, with some of the best warranties available in the industry.”

Mitsubishi also revealed its re-designed for 2017 Mirage gets a redesigned hood, grille, front and rear bumper, fog and headlamps, rear spoiler and wheels. The exterior styling was given purpose, with an aerodynamic design to maximize fuel-efficiency and a simple, restrained form to help reduce weight, creating a car in which form and function come together, Mitsubishi noted. 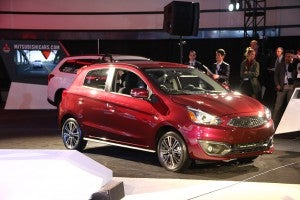 The 2017 Mirage gets a redesigned hood, grille, front and rear bumper, fog and headlamps, rear spoiler and wheels.

The car also gets some new tech features including Android Auto and Apple CarPlay – the first Mitsubishi vehicle to get this infotainment system in the U.S. Interior enhancements include new seat fabrics, gauge cluster, steering wheel and an available 300-watt Rockford Fosgate audio system.

The 2017 Mirage continues to use a 1.2-liter three-cylinder DOHC engine with the maker’s latest version of the Mitsubishi Innovative Valve timing Electronic Control (MIVEC) variable valve-timing system that maximizes fuel efficiency and power output while greatly minimizing exhaust emissions. With the addition of a roller-type camshaft, Mirage increases its horsepower to 78 hp and 74 lb-ft torque.

Mirage’s handling has been improved by optimizing the spring rate and damping force of the shock absorbers while adding stiffness to the front end to achieve stability improvements. If it handles better, it needs to stop better and the new Mirage gets bigger diameter brake discs in the front and the rear brake drums.

(To see more about the debut of the 2016 Mitsubishi Lancer, Click Here.)

The 2016 Outlander Sport has a starting MSRP of $19,595 while no pricing information was given for the Mirage.