Going batty for the Batmobile. 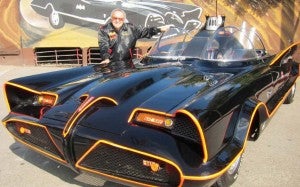 George Barris with the TV Batmobile.

When he got the call from the studio, George Barris was given just 15 days to transform an old Ford concept car, the Futura, into the iconic Batmobile from the 1960s-era TV show Batman.

It was just one of the many wild and wacky designs Barris came up with during a long career as the self-described “King of Kustom Kulture.” Working with his brothers, he started out customizing a 1936 Ford during his high school years in Roseville, California. And over the next seven decades, Barris created all manner of exotic automotive designs for both Hollywood and individual collectors.

“With every pow, bang, wow, wee, I wanted the car to do something just like the actors,” Barris told the Reuters news service before the original TV Batmobile went up for auction in 2013 – eventually drawing a winning $4.2 million bid. “The car had to be a star on its own. And it became one.” 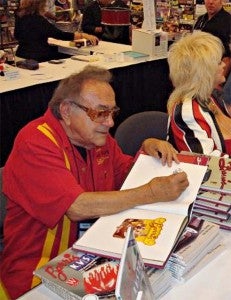 So did Barris, who died Thursday at the age of 89. Even in his final years of declining health, the diminutive soon of Greek immigrants would regularly appear at collector rallies, the Los Angeles Auto Show and events like the annual Specialty Equipment Manufacturers Assoc. convention, better known as the SEMA Show, in Las Vegas.

(Click Here to check out some of the hot debuts as the 2015 SEMA Show draws to a close.)

And he had plenty of stories to tell about the cars he built and the folks, and studios, who bought them.

Born in Chicago on November 20, 1925, he was the child of James Salapatas and Fanicia Barakaris. Like so many immigrants of that era, they Americanized their family name to Barris. But when his mother died, while he just three, George and his brother Sam moved to Roseville, California to live with relatives.

In the years leading up to the Second World War, California was fascinated with car culture, and hot rods could be see everywhere. As a teenager, the two brothers did some work on a 1925 Buick, using the money to buy a 1936 Ford, a popular car in the hot rod community. George completely customized it and created the oddly named Kustom Car Club while still in school.

His family wanted him to go work for their Greek restaurant, but he had other ideas for what to do after school, telling the Los Angeles Times in 2012 how he “rushed to sweep floors at a local auto body shop as soon as school let out.” 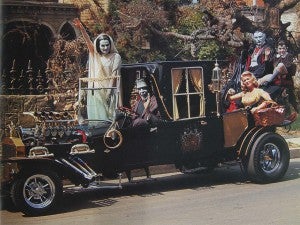 Some of Barris's best-known works, like the Munsters Koach, was done for television.

The brothers headed to Southern California after the war, already an automotive mecca, with a cadre of carroissiers like Dutch Darrin, creating one-off bodies for celebrities looking to customize their Bentleys, Packards, Duesenbergs and Rolls-Royces. George and Sam focused on the more democratic hot rod community, but their often outrageous designs brought them an elite following, as well, with customers including the likes of Frank Sinatra and Elvis Presley.

Barris briefly tried his hand at racing, but gave it up when his custom work began to demand all his time.

After Sam Barris left the business in the 1950s, George and his wife, Shirley, made Barris Kustom Industries work on their own, later bringing son Brett into the business.

His best works, like the classic Ala Kart – a which started out as a 1929 Ford Model A pickup — are icons of the custom and classic car circuit. A 1949 Mercury the Barris brothers reimagined was one of the stars of the exclusive Pebble Beach Concours d’Elegance this past August.

(Only the most elite: Click Here for a look at the 2015 Pebble Beach Concours.)

Barris himself continued making appearances through the summer, among other things turning out to sign copies of his book, “King of the Kustomizers: The Art of George Barris.” 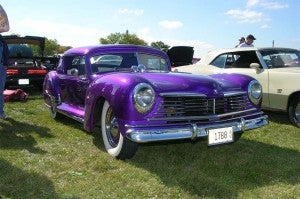 Barris did plenty of work for regular collectors, including this remake of a 1947 Hudson.

At a popular level, it was Hollywood that made Barris a star, TV and film commanding some of his most outlandish efforts. These included not only the Batmobile but the “Black Beauty,” a customized Lincoln driving by Bruce Lee in “The Green Hornet,” and the Munster Koach for the comedy series, “The Munsters.”

Some of his most iconic designs landed on the small tube, but there was a lot of work for the silver screen, as well, starting with the 1958 angst drama, “High School Confidential.”

In recent years, Toyota commissioned him to customize a Prius – though he wasn’t allowed to touch the body. He created a special George Barris edition of the Chevrolet Camaro in 2010.

Barris’s wife and long-time partner Shirley died in 2001. He passed away in his sleep this week, just before his 90th birthday.