Ragtop SUV gets Tinseltown debut ahead of LA Auto Show. 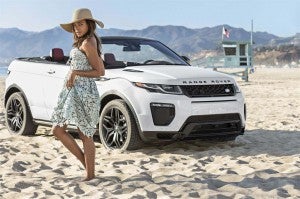 She’s helped Bond, James Bond, save the world. Now, Moneypenny – also known as actress Naomie Harris – is lending her support to British maker Land Rover as it rolls into Tinseltown for the annual L.A. Auto Show.

Harris was on hand for a sneak preview of the new Range Rover Evoque Convertible, the maker’s first true convertible and one of the few droptop SUVs ever offered. The new model will get its first public showing at the Los Angeles Convention Center later this week.

The actress’s appearance was well timed considering the huge success of the new James Bond film, SPECTRE. The 24th in the long-running franchise’s history, has been holding onto the global box office lead since it debuted.

(Live from LA! Click Here to check out all the new models debuting at the 2015 auto show.)

Along with the requisite Aston Martin – Bond drives a custom-made Aston DB10, complete with gadgets like flame-throwers – the film features a number of customized models developed by the Jaguar Land Rover Special Operations division.

“I was so impressed by the design of this car; it’s like nothing I’ve seen on the road before and is so sleek!” Harris declared during her sneak preview. “I love the fact that it is just as much at home driving down the Pacific Coast Highway in LA, as it is off-road in the British Countryside.” 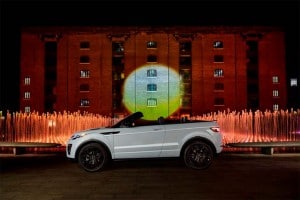 While Land Rover and other SUV brands have offered models with removable or canvas tops before, the Range Rover Evoque Convertible is one of the very few to offer a true, foldaway convertible roof. The British maker is hoping that will add to the Evoque line’s strong sales success since the compact model was launched in 2012. It’s already the most popular model in the entire Land Rover line-up.

Mike Cross, Land Rover Chief Engineer, contends that through the use of “innovative engineering and the application of advanced technologies,” the Range Rover Evoque Convertible will maintain much the same level of on- and off-road capabilities as the current, hardtop ute.

(JLR launching three new models at LA Auto Show. Click Here to check them all out.)

While clearly unusual, the ragtop version of the Evoque isn’t the first in the utility vehicle segment. Nissan attempted to pull off a similar concept with the ill-fated Murano CrossCabriolet. That vehicle was killed off after just a few brief years on the market due to sluggish sales.

Precisely why the British brand, part of the Indian-owned Jaguar Land Rover, thinks it will do better with the Evoque Convertible is far from clear. But it may be hoping that with its smaller size a ragtop version of the compact ute will be more visually appealing to potential buyers.

Nonetheless, considering the modest sales of the overall convertible market would suggest that this offering would be more of an image car than a serious contributor to Range Rover volume. 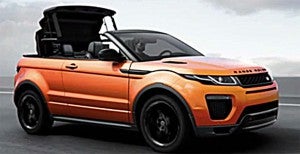 The Evoque's ragtop can operate while driving.

“Our challenge has been to evolve the Range Rover Evoque design without diluting its distinctive character,” Land Rover design director Gerry McGovern said earlier this year.

Key styling signatures, notably the rising beltline and the rearward sloping roof, remain hallmarks for  all versions of the Evoque, which saw a mid-cycle update for the 2016 model-year. Among the revisions, the hardtop and convertible all get a new front bumper, and two different grille designs.

A modified version of the Evoque’s new Rollover Protection System will be used by the new Convertible.

There are a number of new tech features shared across the Evoque family, including a Driver Drowsing Monitor that watches for the sort of steering inputs that might suggest a motorist is falling asleep. If that happens, it will flash a visual warning and then an audible alarm.

Inside, the infotainment system now can be operating using smartphone-style swipe gestures, and smartphone apps can controlled from the touchscreen. A buyer can opt to upgrade from a basic 6-speaker system up to two Meridian audiophile packages using either 11 or 17 speakers.

The new Range Rover Evoque Convertible – minus Moneypenny – will rolls into showrooms next spring and will carry a base price of $50,475 plus a $995 delivery fee.