German maker has had oddly low number of safety problems.

VW may have cheated on reporting crash data to the government, as well, warns study.

(This story has been revised to include a new comment by VW and includes charts examining the EWR data of 11 major automakers.)

Even as Volkswagen struggles to deal with its diesel emissions scandal, new data raise questions about whether the automaker has properly reported death and injury claims to U.S. regulators over the past decade.

A study by the financial advisory firm Stout Risius Ross Inc, found that Volkswagen of America reported nine times fewer deaths and injuries than the average of the 11 largest automakers operating in the U.S. market. Significantly, VW reported less than half as many incidents as either Fiat Chrysler or Honda, both of which have been fined for underreporting their own death and injury data.

The Volkswagen figures stand in sharp contrast to the results of an earlier study of U.S. highway death data for 2010 to 2013 conducted by the National Highway Traffic Safety Administration. It found VW’s fatality rate was about average on a sales-weighted basis.

“The data (from the latest study) demonstrate that even on a fleet-adjusted basis, the number of reported incidents by Volkswagen is significantly below what one would expect based on those reported by other automakers,” Neil Steinkamp, a Stout Risius managing director, told the Bloomberg news service, which commissioned the study.

(Are other makers cheating on diesel tests? Click Here for the exclusive report.)

At the low end of the scale were, in descending order, Chrysler, Honda, Nissan and VW. Both Chrysler, with a reported 101 incidents, and Honda, at 78, have both acknowledged underreporting their death and injury records. Volkswagen, nonetheless, came in at just 34 incidents, “significantly below the reporting of automakers that have already been cited for non-compliance,” according to Steinkamp.

Several Volkswagen insiders approached by TheDetroitBureau.com acknowledged surprise at the seeming disparity. Spokesperson Jeannine Ginivan responded to a request for comment late Monday by stating, “Volkswagen considers the safety of its consumers and passengers a top priority. Volkswagen of America has received the study on Early Warning Reporting data; we take our reporting responsibilities very seriously. We have reviewed and will continue to evaluate the findings.”

NHTSA began requiring automakers to provide detailed reports on death and injury claims 15 years ago in the wake of the Ford Explorer/Firestone tire fiasco. The new approach was designed to prevent a repeat of a situation in which it only became clear after more than 200 deaths had occurred that some of those tires were unexpectedly failing, leading to vehicle rollovers.

NHTSA has come under fire for failing to track more recent problems, such as the failure of GM ignition switches linked to more than 100 fatalities, as well as the problems with airbags using inflators produced by Japanese supplier Takata. 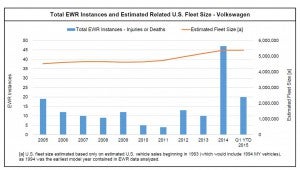 Honda, the largest user of Takata airbags, was fined $70 million when it acknowledged underreporting its safety problems earlier this year. Fiat Chrysler was subsequently hit with a record $105 million fine – and ordered to take actions to speed up recall response rates on a number of vehicles.

The federal safety agency has promised Congress and the public it will crack down on lapses by the auto industry, and that includes providing complete and accurate information on deaths, injuries and other safety-related problems.

NHTSA shares some of the blame for the problem, said Clarence Ditlow, director for the Washington-based Center for Automotive Safety. “The manufacturers quickly caught on” that the agency didn’t have the resources to track all the information, Ditlow told TheDetroitBureau.com, though he quickly stressed that, “This was no excuse for breaking the law.”

Asked if was possible VW vehicles really did have nine times fewer deaths and injuries than the industry average, Ditlow tersely responded, “No,” adding his belief that, “If a manufacturer is going to cheat in one area they’re going to cheat in another,” a reference to the VW diesel emissions scandal.

The German maker has now acknowledged inserting secret code in its engine control systems designed to detect when a diesel vehicle is undergoing testing. When that happens, it significantly reduces emissions of oxides of nitrogen. But in real-world use, those same vehicles can produce up to 40 times the federal limit for smog-causing NOx.

With two of the other makers at the low end of the scale already in trouble for underreporting safety issues, NHTSA is expected to take a closer look at overall compliance with the early reporting system. The agency currently has four staff to handle the process of examining death and injury reports. President Barack Obama has called for the hiring of another seven. But despite holding a series of hearings on safety problems, Congress has yet to approve that budget request.