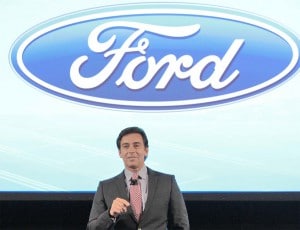 Ford CEO Fields has steadily expanded the maker's presence in China, including production and R&D.

Ford Motor Co. will invest nearly $2 billion over the next five years on its Chinese R&D operations in a bid to catch up to market leaders Volkswagen AG and General Motors.

A latecomer to what is now the world’s largest automotive market, Ford has rapidly gained ground in recent years as it has expanded both its Chine product portfolio and manufacturing network. Much of its growth has come at the expense of Japanese rivals like Toyota, but the current crisis that has tripped up VW could prove another opportunity for Michigan-based Ford.

The new R&D effort will include the battery-based vehicles that Chinese regulators are demanding in an effort to deal with that country’s endemic smog problems. At a conference in Shanghai on Monday, Ford CEO Mark Fields said the maker will introduce both a hybrid version of the midsize Mondeo, and a plug-in, the C-Max Energi, in China next year.

“By 2020 we will offer customers in China a range of hybrid, plug-in hybrid and full electric vehicles,” Fields promised.

(Ford aiming to get an Edge at SEMA with extreme versions of its midsize crossover. Click Hereto check them out.)

Unlike cross-town rival General Motors, Ford was a relatively late entry into the Chinese market and has struggled for years to work its way into the upper tier in a country where over 20 million vehicles are expected to be sold this year. 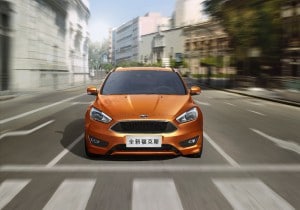 But despite the recent slowdown of the Chinese market, Ford has begun to grow at a rapid pace, partly by expanding its product line-up while also boosting production capacity. Just last March, Fields visited Hangzhou, 100 miles outside Shanghai, to help dedicated a new, $760 million plant meant to boost Ford’s annual output to 1.2 million vehicles.

“This world-class facility will help us accelerate the delivery of high-quality, innovative products to our customers in China,” Fields said at the time.

Ford now operates 10 engine, component and assembly plants in China. With the new Hangzhou plant and the expansion of an older facility in Chongqing, Ford will be the fourth-largest maker in China by capacity, though it is currently number five in terms of sales, behind GM, VW, Hyundai and Nissan.

Fields said the maker will now add $1.8 billion to its research and development budget to come up with the sort of vehicles and technologies that will play well in the Chinese market. That will range from things like the Sync 3 infotainment system to electrified powertrains. Shanghai, Beijing and a number of other major cities have put a limit on new vehicle registrations, in part, due to smog problems. Buyers can sidestep those limits if they opt for qualifying battery-based vehicles.

Some observers are questioning the timing of Monday’s announcement, however, noting that Chinese auto sales dipped 3.5% year-over-year in August, the third consecutive monthly decline and a sharp reversal after more than a decade of double-digit annual growth. Ford’s sales were off 3% last month, and fell 1% for the year-to-date, to around 700,000.

The Detroit maker has, nonetheless, been able to stay slightly ahead of the overall market, with much of its growth in recent years coming at the expense of Japanese brands like Toyota and Honda. Only Nissan has been able to crack into the list of China’s top five manufacturers.

But Ford may have another opportunity, observers note. Market leader Volkswagen has confirmed it sold a small number of diesels in the country equipped software designed to cheat on emissions tests. VW grew to become the world’s largest automaker for the first half of 2015, but many observers believe the global scandal that’s erupted over the diesel scam could set the maker back in a number of key markets, including China.