A diesel worth a closer look. 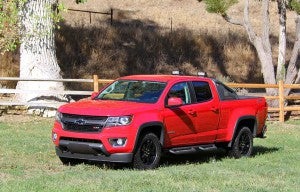 A Z71 version of the 2016 Chevrolet Colorado Diesel.

It’s probably a good time to clear the air…about diesels, that is. Sadly, the scandal touched off last month by the revelation Volkswagen had cheated on diesel emissions testing could choke off the emerging U.S. market for this technology. But spend a little time behind the wheel of the new 2016 Chevrolet Colorado Diesel and you’ll quickly understand why that would be a big mistake.

Diesels have long been favored by heavy-duty truckers because of their fuel-efficiency, hauling power and durability. Now, add the fact that the 2.8-liter inline-four in the Colorado is smooth, quiet and, yes, as clean as anything in its class and you get a package that is clearly worth considering if you’re in the market for a midsize truck.

But timing is everything, or so it’s often been said, so it remains to be seen if the VW scandal will cause potential Chevrolet Colorado diesel buyers to hesitate.

To get a sense of how the newest version of Chevy’s midsize truck performs, we headed out to the Alissal Ranch, in the parched and hilly horse country an hour outside of Santa Barbara, California. It gave us the opportunity to try out several different versions of the truck, including the rugged Z71 off-road package, as well as a more street-ready model. 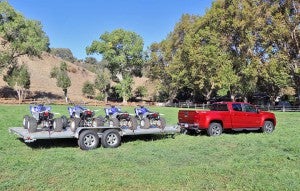 And, as fuel economy is likely to be one of the big issues for potential buyers, let’s start right there. Even with its big off-road tires, light bar and other gas-guzzling features, the Z71 model managed to deliver at least 24 miles per gallon on a route set up to simulate the EPA’s own mileage testing procedures. We did notably better with another version of the truck set up more like what the typical buyer will opt for. Some of our colleagues saw numbers of as much as 33 mpg on the highway.

The EPA has yet to rate the new 2016 Chevrolet Colorado Diesel, but brand executives are confident the numbers will come in at least slightly better than what Chrysler is getting with its own diesel pickup, a version of the full-size Ram 1500. That would mean something in excess of 21 mpg City, 29 Highway and 24 Combined. If they’re right, that’d make the Colorado “oil-burner” the most fuel-efficient pickup on U.S. highways.

At a time when gasoline is now dipping to less than $2 a gallon in some parts of the country, fuel efficiency alone would likely not make a great selling proposition for Chevy, however. The good news is that the Colorado Diesel has a lot more going for it. 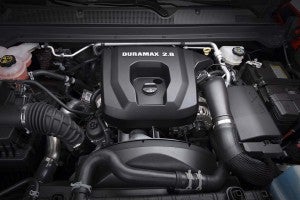 On-road, acceleration was pleasantly peppy. Off-road, the Colorado proved capable on a moderately rugged old horse trail. Among its new features: a hill descent control system that helps hold a preset speed on down grades of at least 10%.

The Colorado isn’t quite the serious off-roading machine of the new 2016 Toyota Tacoma, but it is competent enough and much more pleasant to drive on-road.

We’ll have to wait awhile to see if the Thai-built engine can deliver the sort of rugged durability that heavy-duty truckers so appreciate, but it sure can deliver when it comes to hauling. At just 2.8-liters, the Colorado’s diesel makes a seemingly modest 181 horsepower, but what really matters to truckers is wheel-spinning torque, and here’s where it shines, coming at 369 pound-feet.

The new truck will tow a trailer of up to about 8,000 pounds – about what you’d have hoped for with a full-sized Chevy Silverado back in the 1990s, noted chief engineer Anita Burke, who came along for the ride. Payload, meanwhile, is 1,480 pounds. 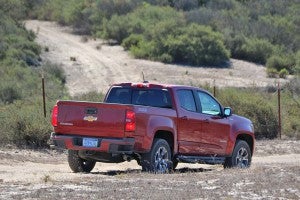 That’s more than enough for all but the most serious truckers, at least those who don’t want to move up to a full-size model like Silverado. And, if anything, the market may be approaching one of those classic paradigm shifts.

Back in the ‘80s, compact and midsize trucks dominated the market. But full-size models now outsell the smaller offerings by almost 10-to-1. Since GM returned to the midsize market a year ago with the Chevy Colorado and GMC Canyon, however, the market has shown new signs of life. And sales could really take off with the arrival of other new offerings. Toyota has redesigned its chart-topping Tacoma for 2016. Honda is ready to relaunch the Ridgeline. And Ford is reportedly preparing a new U.S. version of its Ranger.

(Is this the new U.S. version of the Ford Ranger? Click Here to find out.)

The mileage and capability offered by the Colorado diesel could convince even more full-size buyers to rethink their options. But diesels have traditionally been all about trade-offs, especially when it came to comfort. After spending a couple days with the new truck, however, it became clear that traditional drawbacks, including noise, vibration and harshness, have all but been eliminated. 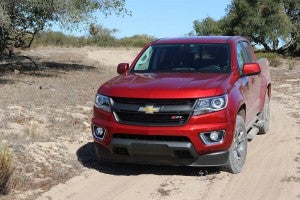 The diesel could generate 10% of Colorado sales.

Sitting inside the cabin, windows up, you’d have a hard time telling you’re driving a diesel. Even outside, Chevrolet has largely eliminated the traditional clattering that readily identified an oil-burner. Credit such thoughtful bits of engineering as a centrifugal pendulum absorber, balance shafts, hydraulic engine mounts and the extensive use of sound-deadening materials, even around the wheel wells.

For 2016, Chevy will only offer the Colorado Diesel with a Crew Cab for retail buyers, though there will be a smaller cab available for fleet customers. The maker expects that about 60% of the diesel models will be equipped with all-wheel-drive.

The gas-powered Colorado comes in at about $10,000 less than comparably equipped versions of the bigger Silverado. The diesel will narrow that gap a bit, its starting price of around $35,000 nearly $4,000 more than the same truck with a 3.6-liter gasoline V-6.

Returning to the midsize market, no one was ready to make a public prognostication about the potential demand for the Colorado and Canyon models. But sales have exceeded GM’s wildest imagination, the maker recently adding a third shift at its truck plant. While Chevy is equally reluctant to predict how well the Colorado Diesel will do, Burke said she expects to see “at least 10%” of next year’s truck come equipped with the high-mileage engine. 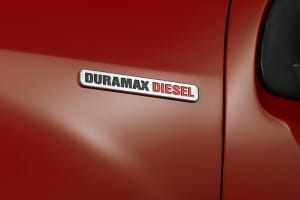 But has the reputation of the diesel been irreperably damaged in the eyes of Americans?

That is, of course, if the whole VW scandal doesn’t scare potential buyers away. Some new surveys show that the majority of Americans think all automakers are cheating on their emissions tests. While VW might not have been alone, one can expect to see the EPA cracking down from now on. And barring a real shocker, that should mean that the 2016 Chevrolet Colorado Diesel will pull it all together: delivering great mileage, low emissions, and plenty of performance and hauling power.

It’s a combination many potential truck buyers will likely find too compelling to ignore.