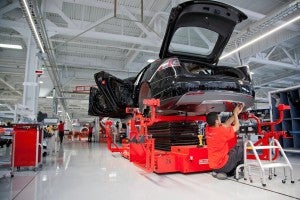 Tesla is looking to raise $500 million in capital for product and Gigafactory development.

Days after it reported another quarterly loss and a study shows it’s basically losing $4,000 on every Model S it sells, Tesla Motors is looking for investors to gobble up another $500 million in stock with the EV maker’s latest public offering.

Tesla said it “intends to use the net proceeds from this offering to accelerate the growth of its business in the United States and internationally, including the growth of its stores, service centers, Supercharger network and the Tesla Energy business, and for the development and production of Model 3, the development of the Tesla Gigafactory, and other general corporate purposes.”

In the spirit of shared sacrifice, Tesla’s founder and CEO, Elon Musk, will buy the first $20 million, according to the automaker. Tesla intends to grant the underwriters a 30-day option to purchase up to $75 million of additional shares of common stock.

The offering comes after it reported its disappointing second-quarter earnings results, noting the development of the upcoming Model X has been more “challenging” than expected, including the costs associated with it.

When combined with the poor results from Model S sales, you have a perfect cash-sucking storm, which has left the company with barely $1.15 billion in cash at the end of June, about a 57% year-over-year decline. So, it’s time to bang the drum for more cash with the offering.

The company’s financial woes are all the more disconcerting considering Tesla appears to be struggling at a time when much of the rest of the industry, particularly Detroit’s Big Three makers, are bringing in billions after nearly a decade of economic struggles.

On the other hand, backers caution that Tesla isn’t any ordinary auto company. It is in the midst of putting in place a significantly different business model, one that relies solely on battery power and a network of company-owned stores rather than the traditional franchised distribution network, which the latest round of fund-raising will help.

And though sales for the year are expected to run only between 50,000 and 55,000 – barely 0.5% of General Motors’ global total – it has been growing the numbers at a time when the overall electric vehicle market has been shrinking in the face of declining gasoline prices.

(Tesla disappoints with 2nd-quarter earnings news. Click Here to find out why.)

The real test, Tesla stresses, will come with the launch of the Model X in the coming months. If Tesla hits its target, that would boost production volumes closer to 90,000 next year. And with the planned addition of the more mainstream Model III later in the decade, Tesla promises to build demand to as much as 500,000 electric vehicles annually.