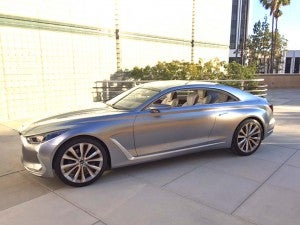 When Hyundai launched its big Equus a few years back, it took a relatively conservative approach to styling in its bid to take on such premium luxury models as the Mercedes-Benz S-Class and BMW 7-Series. Expect to see it shift into a more radical gear going forward, at least if the new Hyundai HCD-16 Vision G Coupe Concept is any indication.

Making its debut a few days ahead of the annual Pebble Beach Concours d’Elegance, the Vision G pushes the luxury design envelope much as the last-generation Hyundai Sonata took things to the extreme in the mainstream, midsize luxury sedan segment. And while there are no plans to put the show car into production, senior Hyundai officials confirmed to TheDetroitBureau.com that signature styling “cues” will reappear on the next-gen Equus when it is redesigned in the next several years.

“You’re not wrong,” when asked if the concept is a forerunner of the Equus replacement, said Peter Schreyer, the director of styling, and one of three presidents, for both the Hyundai and sibling Kia brands. The Vision G “carries a lot of DNA of our future direction.”

Among the most critical differences: the team led by Chris Chapman, head of Hyundai’s U.S. design operations, opted to go for a coupe, rather than sedan, body when developing the HCD-16. It gave them the opportunity to push things a little further, he acknowledged, than with a more practical sedan. 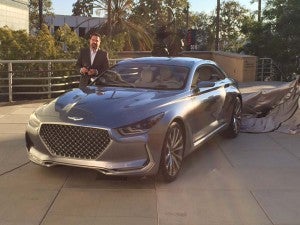 It also gives Hyundai the opportunity to gauge reaction to the design to see if potential buyers will welcome the idea of adding a premium luxury coupe to the Hyundai line-up. Such a product could go up against the likes of the Mercedes S-Class Coupe.

“We’re tickling this idea of expanding our bookshelves in the luxury segment,” Chapman said following the debut of the Vision G Coupe at the Los Angeles County Museum of Art.

The HCD-16 measures more than five meters, nose-to-tail, in line with the current Equus, and rides on a wheelbase of about 3.7 meters. The car is slightly narrower than an Equus, giving the four-seater a slightly more intimate and sporty feel. But inside, it offers about the same space as the current Genesis sedan, making it surprisingly roomy by coupe standards.

Suggesting he was influenced by the organic shape of “a polished river rock,” lead designer Chapman was determined to put some styling space between Hyundai’s luxury line-up and its more mainstream models. That could prove significant to expanding sales at the high end without launching a separate luxury brand.

With its huge grille featuring a chromed, almost chain-link pattern, laser headlights, long hood, high beltline, vertically striped LED taillamps and subtle bustle back tail, the Vision G has what Chapman describes as a “slingshot stance,” one that emphasizes such luxury attributes as refinement, power and exclusiveness. One of the most significant design elements is the broad and sweeping C-pillar, a detail closely influenced directly by Schreyer, a former styling chief at Audi.

Where the current Equus model easily gets lost in the crowd, the goal was to craft a design that will have people “cross the street” to take a closer look, Chapman explained, adding that it “celebrates luxury with no apologies.”

That said, Hyundai officials also used the word, “value” to describe their aspirations in the segment, meaning that they aren’t likely to push the next-gen Equus to a point where it is priced at Mercedes S-Class levels. 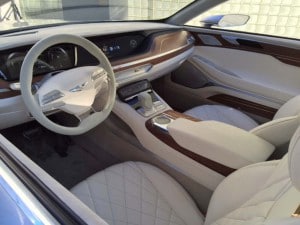 (Automakers improve their APEAL, with Koreans setting the pace. Click Here for more on the new JD Power study.)

As with most cutting-edge concept vehicles, the Hyundai Vision G features plenty of advanced technology, ranging from the distinctive, touch-operated doors to the curved LED display on the instrument panel that gives a subtle driver orientation to the interior. But the goal was not to create a techie videogame on wheels. Much of the U.S. design team’s focus was on crafting a new take on traditional luxury cues.

There are a number of bronzed metal accents both inside and out – including a revised version of the Hyundai Genesis badge on the hood. The four sumptuous seats are hand-stitched with what might be called a quilted spider web pattern, rather than the diamond-stitch used to distinguish some of the market’s most expensive automobiles, such as the new Mercedes S600 Pullman. 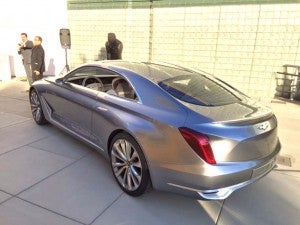 A look at the rear, almost bustle-back shape of the HCD-16 concept.

The unusual pinhole-baffled air vents are “pure concept,” conceded Chapman, but he quickly added that, “We’re definitely looking at (other distinctive) cues that you will see” in future Hyundai luxury models.

The Vision G will go on display on the Concept Lawn at the Pebble Beach Concours over the weekend, a significant move for Hyundai in its bid to be taken as a serious luxury competitor. That will give the maker the first chance to begin gauging reaction to the HCD-16 design.

Significant “cues” will definitely return on the next-generation Equus which is already well into development, but given a positive enough response, we just might see a top-line coupe coming from Hyundai, as well.