New i5 crossover and larger SUV among options. 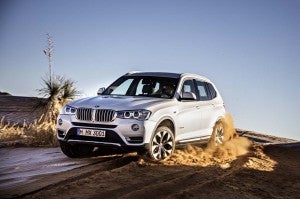 BMW is reportedly adding a new i3 battery crossover that would be similar in size to the current X3.

BMW’s CEO has added more evidence to suggest the Bavarian maker will expand its battery-based sub-brand, BMW i. While Chief Executive Harald Krueger didn’t offer specifics, a new electrified crossover is believed to be one of the options under development.

Meanwhile, sources suggest that BMW may add a big battery-electric SUV to its main brand in a direct challenge to the Tesla Model X sedan due to debut in the coming weeks. Separately, the German company is said to be reexamining the opportunities of working with Apple on the new high-tech vehicle the Silicon Valley powerhouse reportedly wants to develop.

“Between the i3 and the i8, there is space if you look at it from the number point of view,” Harald Krueger said in an interview with the Frankfurter Allgemeine Sonntagszeitung.

The i3 is a city car offered in both pure battery-electric and plug-in hybrid versions. The i8 is a high-performance plug-in two-seater. Both have been well received, though sales volumes remain modest.

TheDetroitBureau.com previously reported that several additional models would likely follow for the electrified brand-within-a-brand as BMW tries to take it more mainstream. Now, sources, say, the focus is on an all-electric crossover-utility vehicle that would be dubbed the i5. It would be roughly the same size as the current, gas-powered BMW X3 model, and is expected to reach market by 2017. 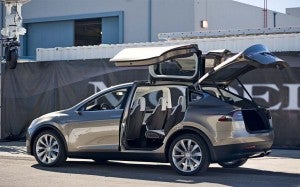 Whether they would otherwise have much in common is unclear. The two initial BMW i models have their own unique platforms and make extensive use of carbon fiber to replace conventional steel. That high-tech material is not only strong but super-light, something that can help boost the range of a battery vehicle.

The i5 reportedly would be able to deliver as much as 200 miles per charge. That would put it more in line with Tesla’s offerings. While most of the battery-electric vehicles now on the market struggle to get 100 miles per charge, Tesla is getting ready to launch a new version of its Model S sedan it believes will top 300 miles. Range is considered a critical issue in the effort to take battery cars mainstream.

Some reports, meanwhile, suggest BMW may be working up another battery-based utility vehicle, more along the lines of the top-end X7 it is developing. That ute might not be lumped in with the new i brand, however.

BMW would not be alone. German luxury makers Audi and Mercedes-Benz also are expected to bring to market new electric models, including SUVs that could deliver as much as 250 miles per charge. Luxury automakers are under heavy pressure to add more alternative-power vehicles to their line-ups to meet new global emissions and fuel economy standards. In the booming Chinese luxury market, meanwhile, such vehicles could qualify for exemptions from monthly registration limits on new vehicles in cities such as Beijing and Shanghai.

BMW CEO Krueger separately noted that his company is talking with a number of high-tech firms over connected car technologies. But conversations with Apple may be farther ranging, according to various sources. As TheDetroitBureau.com reported this week, BMW and Apple may pick up on talks they held last year on a possible joint vehicle project.

While the Silicon Valley firm has not yet confirmed the program, it is said to be developing a battery-based vehicle with autonomous driving capabilities under the codename Project Titan. It has been hiring key automotive talent, including former Fiat Chrysler quality chief Doug Betts.

Apple may follow the lead of its tech rival Google, which is also working on an autonomous driving system, and partner with an existing automaker rather than trying to set up its own manufacturing venture.

(Want to hear more about BMW and Apple? Click Here.)