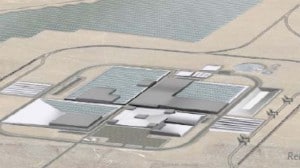 A rendering of the Tesla Gigafactory.

Tesla Motors will get a big helping hand from its Japanese tech partner Tesla in a push to get the planned Gigafactory battery plant into production next year.

Panasonic plans to send “hundreds” of its own employees to the Reno, Nevada plant site in an effort to help Tesla get it completed. The $5 billion Gigafactory is expected to become the world’s largest producer of lithium-ion batteries once it gets up to full speed, those batteries used not only for Tesla’s electric vehicles but also for backup energy systems and other applications.

“We’ll need hundreds of people at the start,” Yoshio Ito, Panasonic’s automotive and industrial systems division chief said in Japan. “We should actually see that starting around the autumn.”

Panasonic, which has been supplying batteries for the Tesla Model S, is a major partner in the Gigafactory, with its own investment expected to approach $500 million.

First announced two years ago by Tesla CEO Elon Musk, the Gigafactory touched off a bidding war among states looking to get the 6,500 jobs it promised. Nevada was declared the winner last September – in return for $1.25 billion incentives.

At the time, Gov. Brian Sandoval declared the package approved by Nevada lawmakers, “some of the most important legislation that’s hit this state in perhaps our history.”

(Tesla takes some unexpected lumps from Consumer Reports. Click Here for the story.)

Skeptics have questioned both the ability of Tesla to deliver on its promised production plans and the need for a factory capable of producing 500,000 battery packs a year once up to speed.

A primary outlet for that supply will be the additional products Tesla plans to bring to market in the coming years. It will follow the current Model S sedan with the launch later this year of its Model X sport-utility vehicle. But Tesla expects the real surge in demand to come with the subsequent debut of its planned Model III, a more mainstream battery-car.

(Tesla losing money, but promising to get Model X to market by Q3 2015. Click Here for more.)

Separately, the California maker recently launched a new unit, Tesla Energy, that will produce, among other things, business and residential battery storage systems.

“I can’t understand the fascination with this,” chided former General Motors Vice Chairman Bob Lutz, during an appearance on CNBC this week. He derided as “overvalued” the concept of using lithium-ion batteries for whole house storage systems.

But the launch of Tesla Energy has seemingly kick-started Tesla stock after it began losing momentum in recent months. Since announcing the company’s Powerwall unit, Tesla shares have risen by 25%.

Tesla is beginning to bring in non-construction teams at the Reno site even before work on the Gigafactory is completed. It hired a dozen workers earlier this year and expects to have 300 more by next year. By the third year, it is expected to have 2,000 workers in place, according to its incentive package, with 4,000 on the site by year five. The eventual target is 6,500.

(For more on the record Tesla incentive package, Click Here.)