US Traffic Deaths on Unexpected Rise 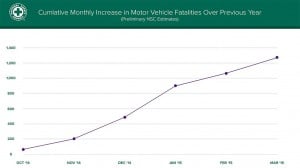 After steady declines for decades, highway fatalities are on the rise again.

The organization warns that the situation could grow worse during what safety groups call “The 100 Deadliest Days,” the period when Americans tend to travel most for summer vacations. The new report coincides with the release of a separate study by the AAA outlining the safety risks posed by teen drivers off from school.

“While the statistics point out a dangerous trend, we have the ability to influence outcomes through our choices and behavior,” said Deborah Hersman, the president and CEO of the National Safety Council, or NSC. “Summer is typically a high-exposure period with lots of miles driven and several long holiday weekends. Take your responsibilities behind the wheel this summer seriously and ensure that you get to your destination safety.”

American roads have generally become much safer during the past four decades, annual fatalities that hit a peak of 54,589 in 1972 fell 40% to 32,719 by 2013, the latest year for which complete statistics are available. And the downturn comes even as Americans have put more cars on the road and, on average, driven significantly more miles.

But based on preliminary data, the NSC finds that highway fatalities surged by 8% during the six months from Oct. 1, 2014, through March 31 of this year – and 11% during the last half of that period.

Exactly why is a question industry experts will be poring over for some time. The council suggests a major factor could be a recovering economy. As personal finances improve, history has shown, Americans tend to spend more time on the road, among other things taking more and longer vacations.

(Teen drivers pose a risk to everyone on the road. For more, Click Here.)

Meanwhile, the NSC said, the coming months could see an even bigger spike. According to a report summary, “Certain crash factors, such as speeding and alcohol, are more common during the summer, too. A yearly average of 2,781 deaths in June, July and August involve speeding, and 2,846 involve alcohol.”

The safety group notes that just since 2010, a total of 48,579 Americans were killed in motor vehicle crashes during the annual 100-day period between Memorial Day and Labor Day.

The study released today by the AAA Foundation for Traffic Safety also noted the potential risks of summer driving. But the AAA focused on the threat posed by teen drivers, revealing that in crashes involving a driver between the ages of 15 and 19, nearly two-thirds of those injured or killed are people other than the teen behind the wheel.

“Teen crash rates are higher than any other age group, and this data confirms that the impact of their crashes extends well beyond the teen who is behind the wheel,” notes Peter Kissinger, President and CEO of the AAA Foundation for Traffic Safety.

(To see more about the expectations for May new vehicle sales, Click Here.)

The National Safety Council has a list of recommendations it says can help reduce highway crashes and lower injuries and fatalities: