Measure has support of major rental firms - but dealers oppose it. 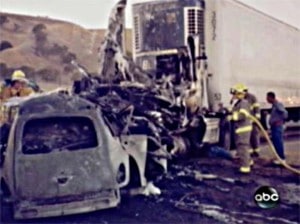 The Houck sisters were killed instantly when their vehicle spun out of control and hit a truck head-on.

A new bill facing the Senate would ban car rental companies from offering vehicles to consumers until outstanding recall problems are repaired.

Dubbed the Rachel and Jacqueline Houck Safe Rental Car Act of 2015, the measure is named after two sisters killed in the 2004 crash of a Chrysler PT Cruiser they had rented which had a serious defect that hadn’t been fixed.

“Whether they come from the renter’s lot or a dealership, cars under recall should be not be on the road until their defect is repaired,” said NY Senator Charles Schumer, and one of the lead sponsors, along with California’s Barbara Boxer, Missouri’s Claire McCaskill Florida’s Bill Nelson, all Democrats. A similar piece of legislation is facing the House of Representatives.

The Houck Act has been put before Congress repeatedly in recent years but repeatedly failed to win support under heavy lobbying by opponents that included major car dealer organizations and some auto manufacturers. They have proposed an alternative that would simply advise a consumer of a potential defect before they actually rented a particular vehicle.

Sen. McCaskill insisted that proposal is “riddled with loopholes that keep defective rental cars on the road and put consumers at risk indefinitely.”

(Another Senate bill aims to provide protection for auto safety whistleblowers. Click Here for the latest.)

Ironically, virtually all major car rental firms have supported such a proposal, including Enterprise, which was hit with a $15 million jury verdict in 2010 as a result of the Houck sisters’ death. General Motors has been the one major automaker to support the proposal.

Congress “needs to take this seriously,” said Rosemary Shahan, the president of California-based Consumers for Auto Reliability and Safety. The problem is all the more serious, she said, with auto recalls hitting record numbers last year, more than 60 million vehicles, in all. According to data tracking service CarFax, as much as a third of all vehicles facing recall typically go unrepaired, a problem that can lead to crashes, injuries and fatalities, sometimes years after the defect was first identified.

“After the record number of high profile recalls last year, customers are rightly concerned about the safety of the car they’re driving,” said McCaskill, the former Chairman of the Senate Subcommittee on Consumer Protection. “It’s time for automakers and dealers to support this commonsense safety measure or come to the table with workable solutions that address their concerns.”

Opponents have warned that the Houck measure could lead to a shortage of rental vehicles and take cars off the road that might be under recall for relatively insignificant problems that they say would not put renters at risk.

But proponents, such as Clarence Ditlow, director of the Center for Auto Safety, insist that even seemingly minor issues can be deadly.

Activists have been calling for stiffer rules – and penalties – to improve automotive safety. They also are pressing to increase funding for the National Highway Traffic Safety Administration which oversees enforcement of U.S. motor vehicle safety rules.

(Motorists making it easy for thieves by leaving keys in cars. Click Herefor the story.)