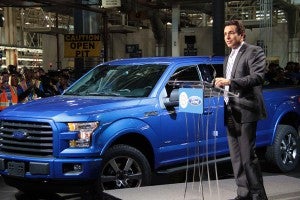 Trucks, like this Ford F-150 shown with CEO Mark Fields, continue to gain momentum in the US market.

Consumer demand for new vehicles during April is the best it’s been in 10 years, according to a new analysis by J.D. Power and LMC Automotive.

With the warmer, spring weather finally settling in across the U.S., total light-vehicle sales are projected to reach 1,463,700, a 5% increase compared with April 2014 and the highest level for the month since April 2005.  The total seasonally adjusted annual rate of sales, or SAAR, is expected to hit 16.6 million units.

“The industry continues to outperform prior-year levels with respect to retail sales and transaction prices,” said John Humphrey, senior vice president of the global automotive practice at J.D. Power. “The average new-vehicle transaction price so far in April is $30,680, on pace to achieve a new record for the month.” The current record was set in April 2014 when transaction prices averaged $29,948,” he said.

Humphrey said the combination of strong sales and high transaction prices positions April to set a new record for the month for consumer spending on new vehicles at approximately $36.2 billion, according to the Power Information Network (PIN) from J.D. Power.

Low gas prices continue to put pressure on passenger car segments, while truck sales have surged. That is forcing Ford Motor Co. to drop a shift at its Michigan Assembly Plant where it produces the compact Focus and an assortment of battery-based models. Chevrolet, meanwhile, is pulling the plug on the first-generation Volt due to slow sales.

(Click Here for more on Ford’s cutback which will impact 700 jobs.)

SUVs, pickups and crossovers are more than picking up the slack. Through April 19, trucks comprised 56% of industry retail sales, up 4.5 percentage points from April 2014 and marking the first time truck sales have exceeded 55% in the month of April since 2004.

Fleet volume is expected to hit 284,700 units, accounting for 19.4% of total April sales. Through the first four months of 2015, fleet share averages 20.6%, up from 19.5% for the same period in 2014. There has been growing controversy centering around fleet sales, but many manufacturers, such as Nissan, insist that demand for corporate fleets – rather than daily rentals – can generate solid profits.

Retail sales are expected to reach their highest levels for April since 2005, according to the forecast. New-vehicle retail sales in April 2015 are forecasted to reach 1,179,000 units, a 5% increase compared with April 2014 and the highest retail sales volume for the month since April 2005 when sales hit 1,190,125.

LMC Automotive is holding its total light-vehicle sales forecast for all of 2015 at 17.0 million units, but has reduced its retail forecast to 13.9 million units from its previous outlook of 14.0 million units due to a slight increase in fleet sales.

“Overall, auto sales remain strong, a trend that is sustainable throughout 2015 due to consumer demand that is being fueled by 50 new or redesigned models in showrooms this year,” said Jeff Schuster, senior vice president of forecasting at LMC Automotive.

“High year-over-year growth will become more challenging over the next few months, but a slip in the growth rates doesn’t change the underlying positive trend,” he stressed.

After a pullback in February, North American production in March bounced back and hit 1.58 million units, a 5% increase from March 2014. Year-to-date volume through March hit 4.28 million units, up from 4.19 million units during the same period in 2014.