Toyota Sienna only family hauler to get passing grade. 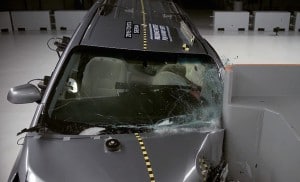 The 2015 Toyota Sienna was the only one of four current model minivans sold in the U.S. that passed the IIHS front offset crash test.

Each day thousands of parents hit the button on their key fob that opens the power sliding door on their family minivan and watch their kids to amble into their seats, knowing that vehicle is among the safest on the road. They are wrong, according to recent crash test results.

“Minivans are popular among parents, a group that tends to be safety conscious, but we’ve only seen two so far that offer decent protection in small overlap crashes,” says David Zuby, IIHS executive vice president and chief research officer.

The exception to the disappointing pattern is the 2015 Toyota Sienna, which earns an acceptable rating. It joins the Honda Odyssey, which last year earned a good rating in the small overlap crash test, in the ranks of Top Safety Pick+ award winners. The Kia Sedona wasn’t tested because it’s making changes to the vehicle to improve it’s crashworthiness, IIHS said, adding it would be testing the new Sedona soon. 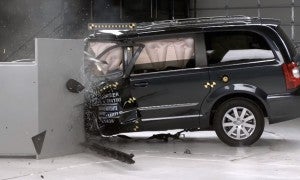 Even though the Sienna received a passing grade, it might be argued it barely did so. Despite the fact that Toyota modified the front structure of the 2015 model to improve small overlap protection, it didn’t hold up that well in the test.

The barrier intruded into the cabin as much as 5.5 inches at the upper door hinge pillar and instrument panel. The crash dummy’s head contacted the front airbag but immediately slid off the left side and he safety belt also allowed the dummy to move too far forward, IIHS noted.

On the plus side, the side curtain airbag deployed and had sufficient forward coverage to protect the head from intruding structure. Measures taken from the dummy showed that the risk of any injuries would be low in a crash of this severity.

The Quest fared worse with the testing indicating that in an offset crash, the driver would be lucky to ever walk normally again.” The Town & Country and its variants, including the now-discontinued 2009-2012 Volkwagen Routan, performed even worse.

“Measures taken from the dummy indicate that injuries to the left hip, left knee and left lower leg would be likely in a crash of this severity. As with the Quest, some of the forces were off the scale,” the group said.

(Click Here for details from experts warning how easily today’s vehicles can be hacked.)

In the small overlap test, which replicates what happens when the front corner of a vehicle collides with another vehicle or an object such as a tree or a utility pole, the crash forces bypass the vehicle’s main energy-absorbing structure. These crashes may be especially difficult for minivans to handle, the group said.

(To see why the BMW i3 was named Green Car of the Year, Click Here.)

That’s because minivans are typically built on car platforms but are wider than cars. As a result, more of the vehicle is located outside the main structure. Minivans also are heavier than cars.