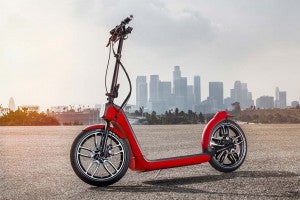 Mini's new CitySurfer concept is a kick scooter with an electric drive motor on it.

And that includes the folks at Mini who apparently have taken the classic Beach Boys tune to heart with the unveiling of their little CitySurfer Concept at the Los Angeles Auto Show.

Even by Mini standards, the CitySurfer is small, and you measure its performance in manpower, as well as horsepower. The maker dryly suggests the two-wheeler “presents an innovative concept providing increased flexibility for individual mobility in conurbation areas.” In lay terms, it’s a kick scooter with a back-up electric drive.

Designed to fold up into a package even the Jetsons would appreciate, the 40-pound CitySurfer will fit into the cramped cargo compartment of a four-wheeled Mini – or in a cargo compartment on a bus, train or even an aircraft, perhaps — letting a rider take it just about anywhere. 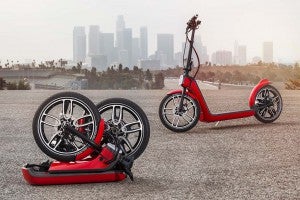 The CitySurfer can travel as far as 15 miles on a single charge and can be plugged into a wall socket to recharge the battery.

But don’t expect a free ride. The British maker notes that CitySurfer’s auxiliary electric drive won’t activate “until a minimum speed is reached from the rider’s own physical thrust.” In other words, you’d get some exercise, like it or not.

Once you’re there, the CitySurfer draws power from a lithium-ion battery hidden within its frame. It stores enough energy to give you between 10 to 15 miles of range, at speeds of up to 15 miles per hour. And battery range is extended by using the same sort of brake energy regeneration found in today’s hybrid-electric vehicles.

Once the batteries are drained they can be recharged either by plugging into a wall socket or a 12-volt cigarette lighter socket in your car.

Mini says it has gone a good bit further than just strapping an electric motor onto a scooter. It designed the CitySurfer with trim pieces to protect it – and the rider – from dust, dirt and rain splash. 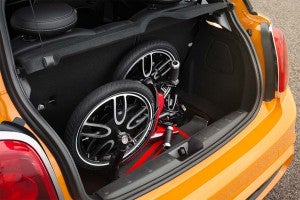 Not only can you transport the CitySurfer in the trunk of a Mini, it can be charged using the 12-volt charger in the car.

And reflecting the realities of modern life, there’s a smartphone holder on the handlebars.

“This enables the use of a mobile phone for navigation purposes as required,” a statement explains. “A user can thus navigate precisely and conveniently to cover the so-called last mile to their final destination. This provides the ideal basis for the rider to benefit from the Last Mile navigation function offered by the Mini Connected XL Journey Mate.”

One can only hope that riders won’t use their phones for texting and Web surfing as they scoot through crowded city centers. Recent data has shown a steady climb in the number of fatalities among bicyclists as urban usage increases – and distracted riding has caught some of the blame.

While Mini isn’t saying whether it’s serious about putting the CitySurfer Concept into production, the company says there’s a clear need for “sustainable solutions for future mobility.” It points to a United Nations study forecasting that 60% of the world’s population will be based in urban centers by 2030, a reality that will make it increasingly difficult to rely on conventional automobiles to get around.

Indeed, a number of cities, such as London, have been taking steps to limit vehicle access to city centers. And Germany’s second-largest city, Hamburg, is considering a plan that would ban cars entirely.